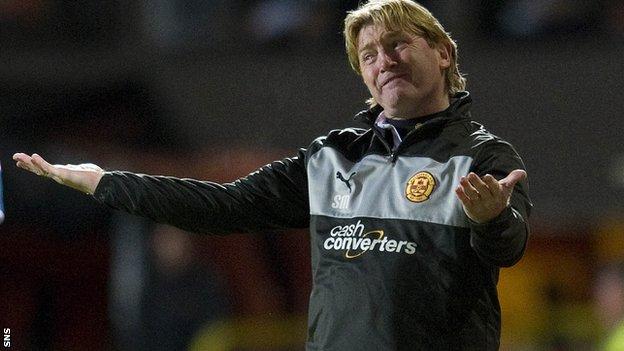 Motherwell manager was pleased with his side's resilience as well their goals in the victory over Dundee United.

The Lanarkshire side dominated the first half before weathering a Tannadice storm in the second.

"It's nice to go away, score lots of goals and play great football but sometimes it's about digging in," McCall told BBC Scotland.

"We had our backs to the wall at times. If I'm honest, United probably deserved a draw out of it."

The second goal was outstanding

After going two goals up within 10 minutes through Michael Higdon and Chris Humphrey, Jon Daly pulled one back before the break and United pressed heavily for the equaliser in the second half.

"It's great to play open, attractive, entertaining football and go forward at every opportunity but you've got to give credit to them - they pushed us back.

"It was hard fought and we needed to dig in second half. We've got a lot of young lads in the back four and they did it well.

"To have a clean sheet for the second half - we're absolutely delighted with that.

"I think we've won three on the bounce now away from home and it's testament to the character."

Humphrey's goal was the winger's first of the season and his manager praised its quality.

"The second goal was outstanding - a quick break, which we're capable of," added McCall.

"Normally Chris hits it over the stand but he struck it sweetly and it was a fantastic goal - from their corner I think it was."