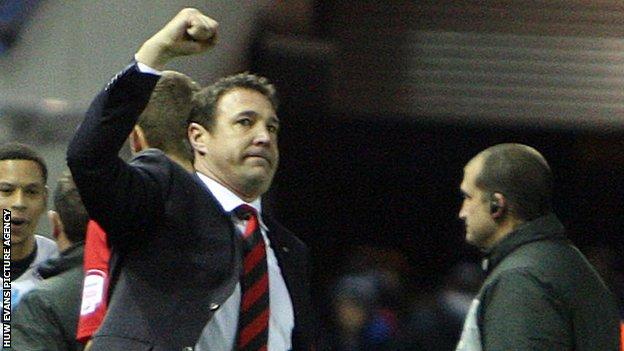 Malky Mackay has praised Cardiff's resilience as they maintained their place at the top of the Championship with a 1-1 draw at Derby County.

Heidar Helguson had given Cardiff a first-half lead but the visitors then had winger Craig Noone dismissed for two yellow cards.

Theo Robinson equalised for Derby but 10-man Cardiff held on.

"We stay top and we stay top scorers in the division as well, which is important," manager Mackay said.

But the Cardiff manager is hoping to welcome back four senior players for Sunday's home game against Sheffield Wednesday.

"We really ended up quite threadbare but I'm very proud of the group," Mackay said of the draw at Derby.

"We've been up in Yorkshire and Derbyshire and picked up four points out of six with a real patched-up group.

"I'm delighted to be bringing [Kevin] McNaughton, [Andrew] Taylor, [Ben] Turner and [Don] Cowie back in, hopefully for Sunday."

Cardiff were leading 1-0, courtesy of Helguson's first-half goal, when they were reduced to 10 men following Noone's dismissal.

Noone picked up two yellows for two clumsy challenges in quick succession before Robinson equalised for Nigel Clough's side.

Although he had no complaints about the decision, Mackay rued Noone's red card - the second Cardiff player to be sent-off in as many games following Simon Lappin's dismissal against Barnsley.

"I was really delighted up to 60 minutes and think we could have gone on and won the game by more," added Mackay.

"The sending-off then changes that and means you have to be dogged and resilient.

"I was delighted by the way we made sure we professionally saw the game out."