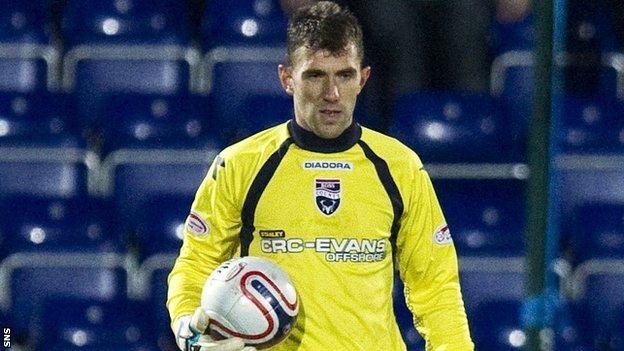 Ross County manager Derek Adams explained his decision to change goalkeeper for the meeting with St Mirren at Victoria Park.

Mark Brown made his league debut in after regular stopper Michael Fraser was dropped.

"Michael Fraser had made a couple of errors and it was just probably the right time for Mark Brown to get that opportunity," said Adams

"It gives Michael Fraser a bit of pressure now."

Adams felt his side had been "unfortunate" not to take a first-half lead but conceded St Mirren had edged the second half on chances.

"Iain Vigurs has had a free-kick just past the post and Sam Morrow's hit the bar," added Adams.

"St Mirren had the better opportunities in the second half and I would say that we'll take a point tonight.

"It's good to get a clean sheet. We would've liked to have scored a goal but it's good for Mark Brown coming in for his first start and getting a clean sheet."