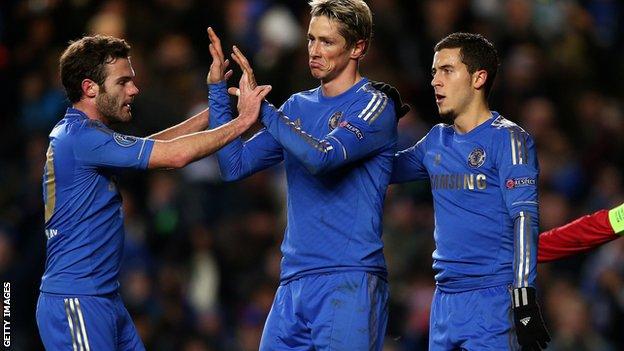 Chelsea suffered the indignity of becoming the first Champions League holders to fail to advance beyond the group stage despite thrashing Nordsjaelland at Stamford Bridge.

Interim manager Rafael Benitez's first win came in the most emphatic fashion - but Juventus's victory against Shakhtar Donetsk in Ukraine meant the Blues were out only seven months after claiming the crown against Bayern Munich in the Allianz Arena.

That triumph in Germany seemed an age away at a subdued Stamford Bridge, the hosts' drop into the Europa League merely emphasising the decline in fortunes that recently claimed former manager Roberto Di Matteo.

The Danish minnows, bottom of the group and arriving in west London with just a point to their name, wasted an opportunity to take the lead when Nicolai Stokholm saw his penalty saved by Petr Cech, Eden Hazard suffering a similar fate seconds later as Jesper Hansen blocked his spot-kick.

A third penalty inside seven minutes saw David Luiz put Chelsea ahead and Fernando Torres added a second before half-time.

Joshua John pulled one back for Nordjaelland seconds after half-time but further goals from Gary Cahill, Torres, Juan Mata and Oscar emphasised the chasm in class.

Sadly for Chelsea and Benitez it was to no avail with their destiny out of their hands, a bitter disappointment so soon after the greatest night in the club's history. They will now head to contest Fifa's World Club Cup in Japan next week with their reign as European champions already over.

Why Chelsea were knocked out

Article 7.06: If two or more teams are equal on points on completion of the group matches, the following criteria are applied to determine the rankings:

Benitez, still trying to win over the sceptics among Chelsea's fans, will contest both that and the Europa League fiercely but this is undoubtedly a bitter blow to a club desperate to build on that momentous night in Munich.

They ended on the same number of points as Shakhtar but the Ukraine side scored more goals at Stamford Bridge than Chelsea managed in the reverse fixture.

The Blues simply had to take care of business at Stamford Bridge and await news from the Donbass Arena in Donetsk. In the end, it was not good.

Benitez once again arrived in his technical area to a decidedly mixed reception and the subdued atmosphere inside the stadium was reflected in a low-key start.

Nordsjaelland were forced into an early change when Ivan Runje was carried off on a stretcher and replaced by Mikkel Beckmann.

For the hosts, Victor Moses was a lively figure and his cross from the right almost resulted in Chelsea's opener, Stokholm slicing the ball against his own crossbar.

May 2006: Losing finalist for Arsenal in defeat to Barcelona

May 2008: Losing finalist for Chelsea in defeat to Man United

Chelsea were shocked when Dutch referee Bas Nijhuis pointed to the spot after Anders Christiansen's shot appeared to strike Cahill on the arm outside the area but justice was done as Cech dived to his right to save Stokholm's penalty.

Within seconds, Chelsea had a penalty of their own when Beckmann blocked Cahill's header with his arm - but once again the goalkeeper was the victor as Hansen saved Hazard's effort.

The deadlock was finally broken six minutes before half-time with the third penalty award inside seven minutes. Patrick Mtiliga was harshly adjudged to have handled and this time Luiz assumed responsibility and made no mistake.

Torres had been desperate for a goal and it finally came on the stroke of half-time when he raced on to Moses's pass to score at the second time of asking.

Chelsea were surprised momentarily when John scrambled home in scrappy fashion 20 seconds after the restart - but it was a brief interruption into what was to become a procession.

Cahill restored Chelsea's two-goal advantage when he headed in from Mata's free-kick before Torres benefited from brilliant work by Hazard to turn in his second at the near post.

Mata was on target himself after Hansen saved his first effort and substitute Oscar ran clear to score the sixth with real composure.