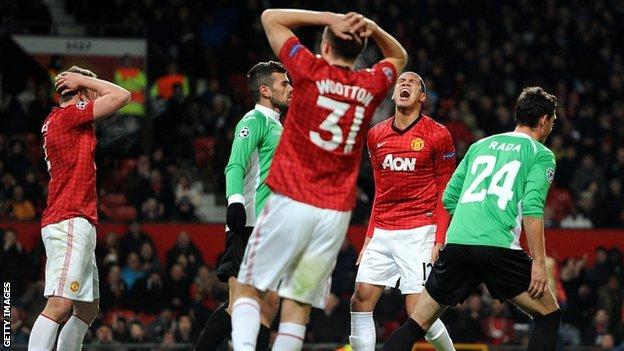 Manchester United suffered their first home defeat in the Champions League for three years on a night of frustration for manager Sir Alex Ferguson.

It is the first time United have failed to score at Old Trafford since being held by Rangers in September 2010.

Luis Alberto's goal early in the second half proved the difference, the Spaniard beating United goalkeeper David de Gea with a 25-yard strike.

United had already qualified for the last 16 as winners of Group H.

This was an evening to forget for United, despite fielding a weakened side. With qualification assured, it was clear many at Old Trafford had already turned their thoughts to Sunday's top-of-the-table clash at Manchester City. But this was not the kind of preparation Ferguson would have wanted.

Only Wayne Rooney remained from Sunday's 4-3 win over Reading as Ferguson sought to hone his striker's sharpness, but it was at the other end of the field that United failed to convince once again.

This was the 15th time in 23 matches this season that United have fallen behind in a match. They have come back to win on 10 occasions but this proved a match too far.

Coming into this game, Ferguson warned his players to expect a repeat of last season's 6-1 humbling at the hands of City if they do not show a marked improvement from the "cartoon cavalcade" defending that has undermined their fine attacking play.

It took Cluj less than 10 minutes to find the chink in United's armour, as first Ryan Giggs and then Chris Smalling ceded possession in their own penalty area to allow Rafael Bastos to test De Gea, only for the Spaniard to scramble the deflected shot to safety.

With captain Nemanja Vidic missing - and far from certain to be involved at Etihad Stadium - United looked vulnerable.

Twice in the space of 10 minutes Cluj striker Modou Sougou had opportunities, with Scott Wootton twice on hand to block the Senegal striker's shot at the crucial moment. Rooney scrambled another effort away.

And yet United, as they have done all season, seemed poised to overcome the generosity of their defending as half-time approached. In the five minutes before the interval their forays grew in focus and three moves, more co-ordinated than anything they had managed until then, almost produced goals.

First, Cluj goalkeeper Mario Felgueiras clawed Rooney's delightful chip out from under the bar, then he produced an instinctive save to keep Danny Welbeck's header out from the resulting corner.

Arguably the best opportunity fell to Chris Smalling but he could only head wide from two yards after Paul Scholes's pin-point pass.

And yet the errors continued to creep in to United's game and, more often than not, they were self-inflicted. De Gea gave the ball away five minutes into the second half, allowing Cluj to create space for Sougou, who stuttered at the key moment. More accomplished teams may not have been as wasteful. As it happened neither were Cluj.

When the ball fell to Alberto just inside the United half, the hosts failed to spot the danger. The Spaniard ambled towards goal and, with no United defender prepared to challenge him, he steadied himself and unleashed a wicked, curling shot that fizzed beyond De Gea, flicking the right-hand upright on its way into the net.

Rooney, in response, continued to push and probe, creating a half-chance for Phil Jones that was snuffed out by the excellent Felgueiras. Ferguson introduced Federico Macheda for Nick Powell but Cluj stood firm as Giggs tested their goalkeeper from a free-kick and Rooney shot straight at the keeper from distance.

The expected United cavalry charge failed to materialise on a night when United simply failed to click. It was a famous night for Cluj but Galatasaray's victory over FC Braga meant it was not enough to take the Romanians into the knockout stages.