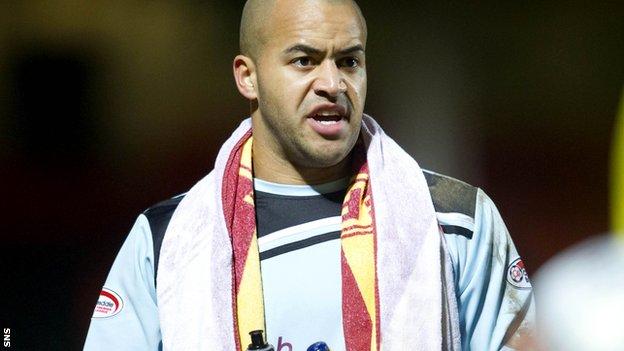 Motherwell have failed to overturn a two-match suspension handed out to goalkeeper Darren Randolph.

Scottish FA compliance officer Vincent Lunny had issued a complaint after the Republic of Ireland international kicked out at Hearts' Callum Paterson.

And the SFA's judicial panel agreed that the incident during Saturday's 0-0 draw constituted violent conduct.

He will then also miss the league visit by Ross County.

Motherwell said on their official website: "The hearing, which lasted for almost 90 minutes, heard contributions from the player himself, alongside goalkeeping coach Gordon Marshall.

"However, the three-person panel upheld the initial offer of a suspension."

Following Tuesday's 2-1 victory over Dundee United, Motherwell manager Stuart McCall had said he would consider an appeal once he had viewed the referee's report.

"He's obviously seen something different in the aftermath than when he saw it at real time," he said.

"The referee will now have had the benefit of seeing the incident at various angles and slowed down on the television."

Randolph played at Tannadice, but McCall believes that he has an able deputy.

That's despite Lee Hollis having played only once for Well since the 26-year-old arrived from Airdrie United in July 2010.

"We have a terrific goalkeeper in Lee Hollis, who will come in for Darren," added the manager.