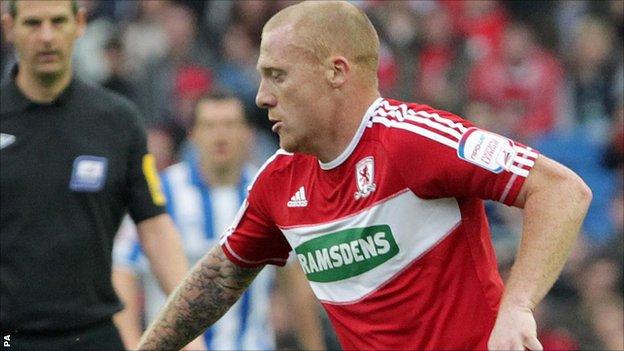 Boro had gone two games without a win after a run of nine matches without defeat, while injuries and suspensions led to four changes to Mowbray's side.

"It was a high-energy performance," Mowbray told BBC Tees.

"Players like Richie Smallwood and Nicky Bailey were anxious to do well and they added drive and zest."

He added: "We were probably over-positive against a team that were struggling [on Saturday in defeat by Bristol City] and yet the balance of the team tonight was different.

"Richie Smallwood came in and gave us a more defensive mind in the middle of the pitch and Nicky Bailey did the same."

Andy Halliday was among the players brought in as cover, and the Scottish winger proved useful in an unfamiliar left-back role on his first league start of the season.

"I've never had any fears about playing Andy," Mowbray added. "We tried it earlier in the season. I had a long chat with him and I wasn't sure he was going anywhere playing as a high-wide attacking player.

"Yet every day in training I see him making great challenges, being disciplined about stopping the opposition and I felt he could play left back for us.

"He's decent with the ball, but he needs to work on that right foot. At times he showed what an attacking threat he could be and was very solid defensively."