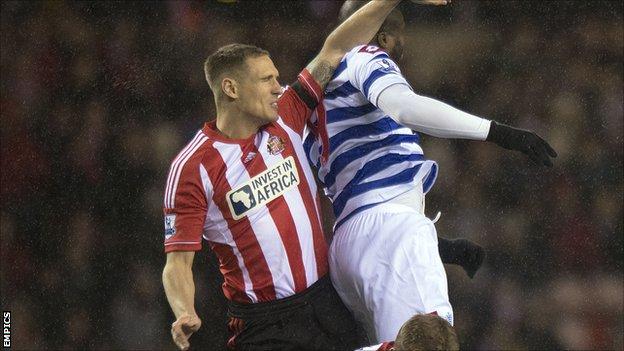 The 24-year-old midfield limped out of Saturday's 4-2 defeat by West Bromwich Albion, and lasted only six minutes at the Stadium of Light before departing.

"It's a different knee that he has injured," O'Neill told BBC Newcastle.

"He's in a fair amount of pain at the moment, so we'll have to see how he is but the signs are not brilliant."

Stockton-born Cattermole has made 12 appearances for the Black Cats this season, although suspension and a previous knee injury have limited his outings.

Sunderland have failed to score on six occasions this season, with defeat in three of those matches.

Meanwhile O'Neill has accepted players are struggling to overcome a disappointing run of form in the Premier League this season.

His side have recorded only two wins in 13 league games, and the draw with bottom side Rangers continued an unwanted record of only five goals scored on home soil.

"The fear factor may come in probably due to confidence, and I've been there as a player myself so I know the feeling,"

"Looking for that elusive goal, the opening goal would have been enough.

"It's really important to get confidence, but it's a brittle sort of thing because you can lose it quickly and it might take you a long time to gain it, but we have to fight through it."