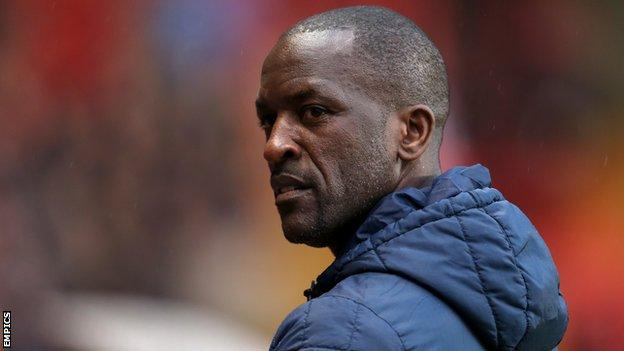 Charlton Athletic manager Chris Powell says he will not get carried away with their rise up the Championship table.

The Addicks are unbeaten in their last five games and currently lie five points off the play-off places.

"It's a season which will test you in many ways. You can never rest on your laurels," he told BBC London 94.9.

We have played the side at the bottom and they were very good. That is what the Championship is like

"We're in a decent place and we want to keep pushing and getting points. We know what we want to do this season and we are quietly going about it."

He added: "We've got a good team and a good squad who want to work and learn together.

"Whenever I tell them stuff they listen and want to do it. That's important.

"There is a real honesty about my group."

Charlton secured only their second home win since August with a 2-0 victory over bottom side Peterborough on Tuesday.

"We were posed a lot of questions and if we were playing against a really confident side we could have had problems," Powell said.

"We dug in, got our clean sheet and I am really proud the players have managed to eke out a home win.

"We have been craving for them. In some ways I suppose you don't care how they come as long as you get them."