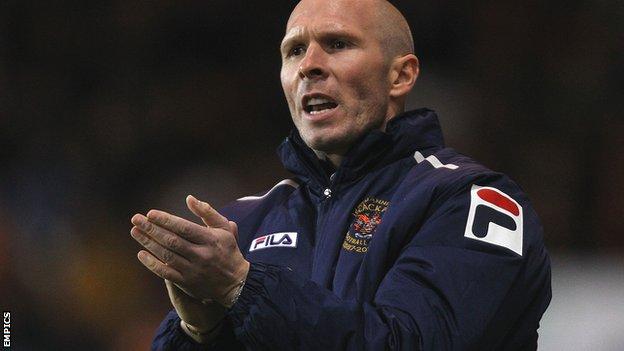 Michael Appleton believes he is getting closer to his first win as Blackpool manager after watching his team draw 1-1 with Birmingham on Tuesday evening.

The Seasiders have drawn all four of their matches under Appleton.

"You make your own luck - I'm a true believer in that," the 36-year-old told BBC Radio Lancashire.

"If you keep persevering and trying to do the right things, under difficult circumstances it has to be said, hopefully something will drop for us."

For the first time since Appleton replaced Ian Holloway as manager, in the game, but Tom Ince's opener was cancelled out early in the second half by Blues skipper Curtis Davies.

I'm very frustrated because a lapse in concentration from a set-piece has cost us the game. If we defend the set-play properly, we win the game 1-0

Kevin Phillips had a goal disallowed, while Appleton's side had two appeals for penalties turned down.

Appleton continued: "It was a bit of a scrappy game and the pitch made it difficult for both teams.

"I'm very frustrated because a lapse in concentration from a set-piece has cost us the game. If we defend the set-play properly, we win the game 1-0."

Blackpool, who are 16th in the Championship, now have back-to-back away fixtures at Peterborough and Holloway's Crystal Palace.

"It's a difficult league and it's relentless," added former Portsmouth boss Appleton. "Anyone can beat anyone. There's no hiding place.

"The players have done ever so well in terms of commitment and what they've given me. I can't ask any more from that point of view.

"I'd just like to think something will fall for us in the final third, one of the boys will show a bit more composure and we'll go on and win a game."