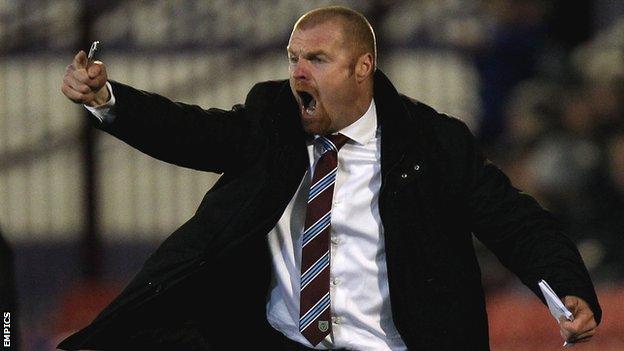 Manager Sean Dyche conceded Burnley did not reach the heights of their previous displays during their on Tuesday.

"I was disappointed with the performance, particularly the first half," he told BBC Radio Lancashire.

"After scoring a very good goal, I expected us to use the ball better. The players didn't respond to that goal and they almost went into a defensive mode.

"The use of the ball was not what we were expecting from our group."

Charlie Austin gave Burnley an early lead with his 21st goal of the season, but they had to be content with a point following Marcus Tudgay's equaliser.

Dyche, who has now taken 10 points from six matches as Burnley boss, continued: "I made the players aware of my expectations of the team and the group.

"The big positive is that we are building a mentality. That's obvious now. We are becoming a and break down."

Burnley are expecting right-back Kieran Trippier to be fit for Sunday's Lancashire derby with Blackburn after picking up a knock at Oakwell.