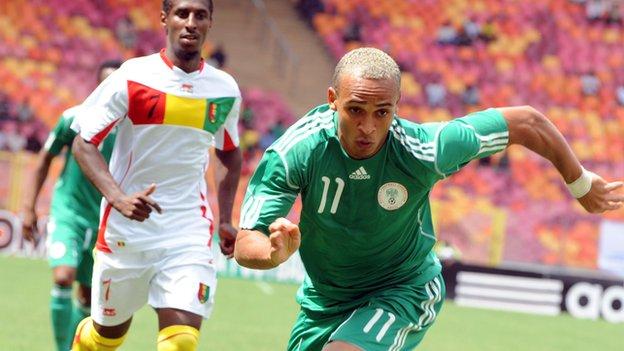 West Brom are preparing for the absence of their African players should they be selected by their countries for next year's Africa Cup of Nations.

Manager Steve Clarke expects striker Peter Odemwingie to be called up by Nigeria and midfielder Youssouf Mulumbu to be included in Democratic Republic of Congo's squad.

The tournament takes place in South Africa between 19 January and 10 February, which means the English Premier League club could be without the key pair at a crucial time in the season.

Odemwingie, who has 54 caps and nine goals for Nigeria, has had his problems with the Nigeria national team set-up recently.

Earlier this month he insisted he had not retired from international football with Nigeria, contradicting comments from Super Eagles coach Stephen Keshi.

The 31-year-old did conceded he is "unhappy" about some things in the national team but said he "will be available when they call me".

And Clarke said: "If Peter continues in the current form he's in, I'd think Nigeria would select him. He has been playing really well for us, he has been fantastic.

"If Nigeria want to go with their best players, I'm sure Peter would be in that squad for the Nations Cup.

"But we have cover for Peter - and Youssouf's absence as well. I've said that all along if people get called up, we have the squad to cover them.

"Saturday's game (a 4-2 win at Sunderland) proved it when Youssouf was out injured."