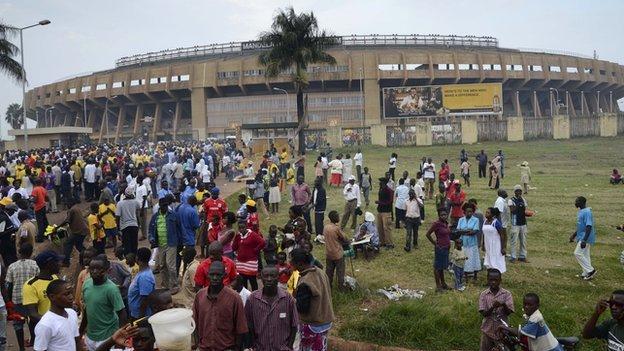 Striker Seleman Ndikumana took his tally to three goals in the tournament as Burundi beat Tanzania 1-0 to reach the quarter-finals of the Cecafa Cup.

After netting a brace in the 5-1 demolition of Somalia in Burundi's first game, Ndikumana made no mistake from the penalty spot in the 49th minute as he beat Tanzanian goalkeeper Juma Kaseja.

The towering striker had been brought down in the box and took it upon himself to score against his former Simba SC team-mate.

A match that was the most entertaining of the regional tournament so far saw both sides create several scoring chances, but the Burundi team looked the most dangerous.

Tanzanian stopper Kasejja was called upon to make vital saves to keep his side in the game. Mrisho Ngassa had several attempts at the Burundi goal including an 88th-minute shot that bounced off the woodwork.

Burundi coach Mohammed Lofty was full of praise after the match. He said: "They did what I asked them to do and we are through to the last eight."

His counterpart Kim Poulsen said Tanzania will have to recover quickly from the defeat in order to prepare for the last group game against Sudan - a match they must win if they are to stay in the competition.

"We just did not take our chances and the two injuries to key players also cost us," said Poulsen.

Earlier on Wednesday, Sudan beat Somalia 1-0. The defeat for Somalia means they are the second team to bow out of the tournament.

Farid Mohammed capitalized on a defensive lapse to slot home the sole goal with four minutes to go.

The victory for Sudan, who came third in the 2011 African Nations Championship, brightened their hopes of making it to the last eight.

Sudan coach Mubarak Slyiman, whose team lost 2-0 to Tanzania in their opening match, said he was excited by the victory but added that they have to work hard in the last group game.

On Thursday the action will shift to Group C with Malawi facing Eritrea, while Rwanda take on Zanzibar.