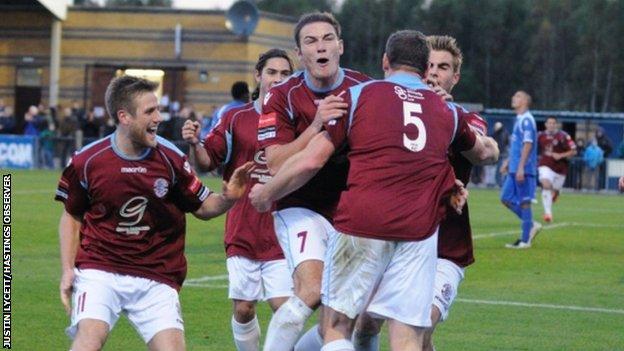 The Isthmian Premier League side are the lowest-ranked team in the second round of the competition.

He told BBC Sussex: "We've all got to go and enjoy it. There will be no pressure on the players to go and win the game as such.

"We've overachieved anyway. If we can go that one step further then this is a once in a lifetime opportunity."

Central defender Ray, who is in his second spell at the club and has been in charge at the Pilot Field for a year, has been surprised by the East Sussex club's success in the Cup this season.

"I didn't have any expectations," the 31-year-old added.

"After not winning in the FA Cup for five years it was nice to get that first win under our belt.

"The challenge at the start of the year was to get one win so we have exceeded our expectations.

"To succeed in the Cup you have to have a little bit of luck, a good draw and make sure you perform on a certain day."

A side called Hastings United twice reached the third round stage of the competition in the mid-1950s but this is the first time the current incarnation have reached the second round.

The old United folded in 1985 but the club were re-established in 2002 when Hastings Town, formerly known as Hastings & St Leonards, changed their name.

As Harrogate play in Blue Square Bet North, just one tier above Hastings in the non-league pyramid, Arrows chairman Dave Walters knows they need to make sure the opportunity to reach the third round does not pass them by.

The minimum we expect is a draw. I can't imagine them fancying coming all the way down here on a Tuesday night

"It's the sort of event that really doesn't happen very often, if ever, for clubs at our level," Walters told BBC Sussex.

"When it does come along you have to make the most of it.

"I'm cautiously optimistic. We've been to teams at a higher level and won before.

"They are obviously a decent side. To have a chance at this stage, we couldn't ask for any more than a club one level higher.

With the gap between the two sides being just 25 league places and one giant-killing already under their belts, courtesy of knocking Bishop's Stortford out in the first round, Ray is also confident that his side will be able to match Harrogate.

"We like the players to keep the ball on the floor, move it quickly and we've got a lot of pace in the side," Ray said.

"We want the players to go and play their natural game with some freedom.

"If we do that we feel we get the best out of the players.

"The minimum we expect is a draw. I can't imagine them fancying coming all the way down here on a Tuesday night."