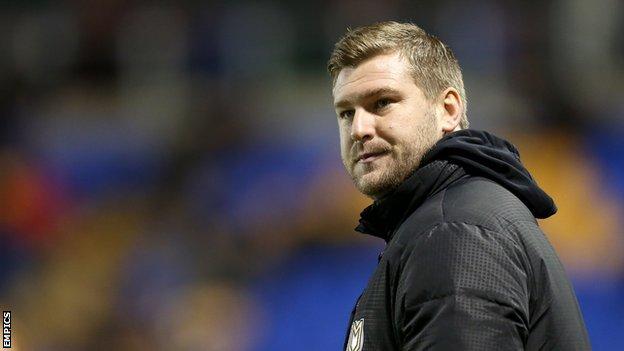 MK Dons boss Karl Robinson has said his scouts have been asked not to attend AFC Wimbledon home games.

Sunday's FA Cup second-round match will be the clubs' first meeting since AFC were formed 10 years ago in response to Wimbledon's move to Milton Keynes.

AFC Wimbledon told BBC Sport in a statement that MK staff were welcome to Kingsmeadow, but suggested they should not wear a Milton Keynes badge.

"They asked us not to [go]," Robinson told the Football League Podcast.

"That's what we've got to respect. They played at Morecambe at the weekend and [scout] Alex Rae went down. We've watched DVDs and everything else and we've tried to do our job.

"We're a professional football club and we've got to rise above any negativity. I'm sure AFC Wimbledon want to do the same."

But AFC Wimbledon have said they thought it could be a problem if Robinson went to the game, but if another member of staff attended, they suggested that they do so without wearing the club's badge.

They also say that, after discussions, MK Dons suggested they would watch AFC Wimbledon play in an away game and not attend a home game.

Anger still remains among AFC supporters at the manner in which their old club was uprooted 56 miles.

And their board have said they and sit with their fans instead.

But Robinson hopes his opposite number Neal Ardley, who played 245 league games for Wimbledon FC, will share a drink with him after the game.

"I'm looking forward to going up against him on Sunday and hopefully we can have a drink after the game like every other manager does," he said.

"If it was at their place I'd love to go and shake his hand even if we lost.

"Mick Harford [MK Dons assistant manager and former team-mate of Ardley's] speaks very highly of him as a person. He's Wimbledon through and through."