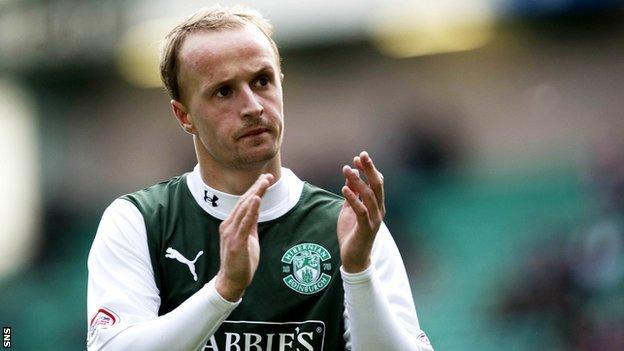 Griffiths has scored 13 times so far this season and Wright thinks his form can ensure Hibs get revenge for defeat by Hearts in last season's final.

"He is the player that is making things happen." said Wright, who scored 59 goals in 197 appearances for the Easter Road club.

"He is full of confidence just now."

The former Dundee striker is currently on loan at Hibs from Wolverhampton Wanderers, a deal which expires in January, although the player has been told he is not part of the English Championship club's plans.

Griffiths' good form was rewarded with a first Scotland cap, earlier in November in the friendly against Luxembourg.

And Hibs boss Pat Fenlon is hopeful the club can keep the in-form striker beyond January.

This is Griffiths' second loan spell at Easter Road, with his first period ending in a humiliating 5-1 defeat to Hearts at Hampden in May.

Wright attended the final and said still aches for everyone at the club, but feels the players can use this as motivation on Sunday.

"It's a chance to gain revenge for what happened last May when we got a doing," explained the 47-year-old, who made one international appearance for Scotland.

"Home advantage is a help. It should be a great occasion on Sunday and hopefully Hibs can do the business this time."

Hibs fans have witnessed a resurgence in the club's form this season and Wright insisted Fenlon must be praised for the turnaround in fortunes.

"Pat's main job when he came to the club last year was survival," said Wright.

"To get to the cup final was a bonus, but it turned out to be an horrendous experience."