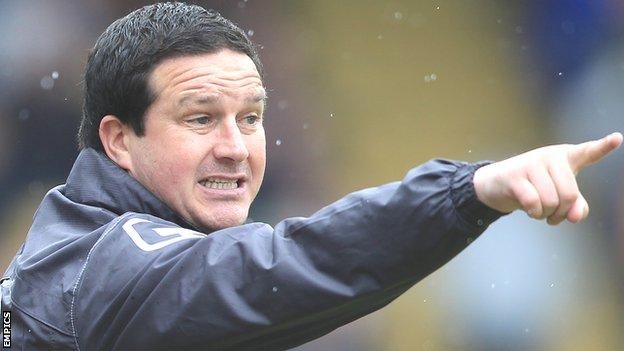 Mansfield Town manager Paul Cox has called his side "arrogant" after they were beaten 2-1 by Matlock in their FA Trophy first round replay on Tuesday.

Matlock play two levels below the Stags in the Northern Premier Division.

Cox told BBC Radio Nottingham: "You cannot go to any non-league football club and expect to not perform for 90 minutes and get away with a win.

"It is an arrogance for us to believe that we can just turn up at places and I need to get rid of that arrogance."

Mansfield took the lead through Colin Daniel, before Lewis McMahon levelled for the hosts.

The Stags had Gary Roberts sent off and Massiah McDonald fired in Matlock's winner.

"It was a lack of mental strength which cost us in the end," added Cox.

"Good teams, and teams which win championships, they come to places like this and they play nasty and horrible, and go away with a 1-0 win.

"We scored the goal and all we needed to do was for everyone to stick to the task and the job that they were given.

"But people switch off and have a lack of concentration and it costs you."