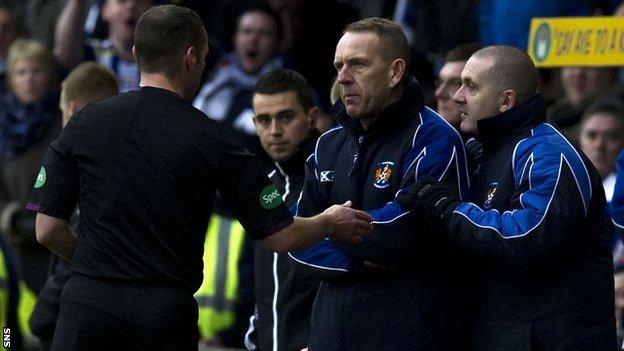 Kilmarnock manager Kenny Shiels has been served with two separate notices of complaint from the Scottish FA.

The Rugby Park boss must answer for critical remarks made about referee Euan Norris after his side's defeat to Inverness on 3 November.

And he faces further scrutiny following his dismissal on Saturday.

Shiels reacted angrily to Manuel Pascali's early sending off and later called for fourth officials to be "strong characters".

The Northern Irishman has until 5 December to respond to the notices of complaint, with a hearing set for 13 December.

Shiels was sent to the stand for protesting against the red card shown to his captain during the weekend loss to St Johnstone.

And he faces possible punishment for a breach of the SFA's disciplinary Rule 203 (misconduct at a match by dissent, adopting an aggressive attitude and by the use of offensive, insulting or abusive language.)

Earlier this month, Shiels said he was going to report Norris for comments the referee had made at full-time.

"I work in an industry where it's mandatory that I give interviews but I'm not allowed to tell the truth," Shiels told BBC Scotland.

"It wouldn't happen in any other industry in the world and that rankles me.

"[SFA compliance officer] Vincent Lunny will not allow me to give an opinion. You ask him why. I want answers to that."

On that matter SFA rules 68 and 71 will be used to judge Shiels's conduct. Those regulations cover comments made in media interviews and newspaper articles, which "impinge upon the character of a match official".

No report on Norris was ever submitted by the Ayrshire club.