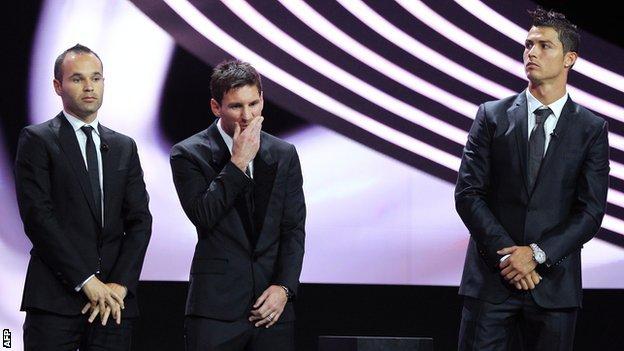 Lionel Messi, Cristiano Ronaldo and Andres Iniesta have been named on a three-man shortlist for this year's Ballon d'Or prize, Fifa has announced.

Messi, 25, has scored 82 goals this calendar year - just three short of the record set by Gerd Mueller in 1972.

Pep Guardiola, Vicente del Bosque and Jose Mourinho are shortlisted for coach of the year.

The winners will be announced on 7 January.

After 50 goals last season in La Liga - including breaking Barcelona's 60-year-old goalscoring record with a hat-trick in a 5-3 win over Granada in March - Messi is expected to win Fifa's player of the year award for the fourth successive year.

Ronaldo, who won it in 2008, provides strong competition after playing a key role as Real Madrid edged arch-rivals Barca to the Spanish title.

The Portuguese scored 60 goals in all competitions in the 2011-12 season as Mourinho's side also reached the last four of the Champions League before being knocked out by Bayern Munich.

He already has 19 to his name so far this term.

Iniesta, a team-mate of Messi's at Barcelona, was named as the tournament's best player as Spain won Euro 2012.

There was also a Spanish theme to the Fifa world coach of the year award.

National team boss Del Bosque was nominated for his role in guiding Spain to a successful defence of their European crown in Poland and Ukraine.

Mourinho steered Real Madrid to the league title in 2011-12 while Guardiola is on a sabbatical after leaving Barcelona at the end of last season following a highly successful spell in charge.

"We have seen again what they did at the Euros and it will be interesting to see what happens in the [2013] Confederations Cup."

The three shortlisted for the women's player of the year includes Brazilian player Marta, who is nominated for the ninth time in a row and has already won the trophy five times.

Meanwhile, Liverpool's Luis Suarez and Rooney are among 15 forward players on the shortlist for the Fifa FIFPro 2012 World XI.

Messi and Ronaldo are also on the list along with the likes of Samuel Eto'o, Karim Benzema, Didier Drogba and Radamel Falcao.

Three of the 15 will be selected for the team, which will be announced during the Fifa Ballon d'Or Gala on 7 January.