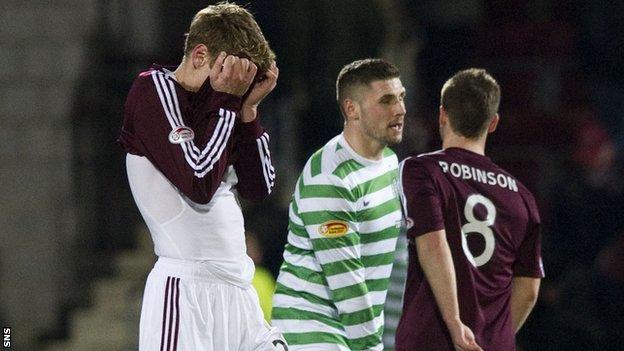 Hearts manager John McGlynn was left baffled by his side's heavy defeat by Celtic at Tynecastle.

The Edinburgh side were on the wrong side of a 4-0 scoreline, despite creating several chances throughout an entertaining match.

"We feel we're harshly done by," McGlynn told BBC Scotland. "The scoreline's harsh on us, but it wasn't for the lack of effort or trying.

"We feel our performance deserved better than that."

And McGlynn praised the commitment shown by his players throughout the 90 minutes.

"We never chucked it," he insisted. "We kept on going and we felt we could maybe have had a couple of goals and gone in 2-2 at half-time.

The Hearts boss felt that Celtic's third goal, an own goal from Ryan Stevenson, had been the moment the game went beyond Hearts' grasp.

"From the angle he was at, he had to be on the bye-line and it still went into the net; so, really, really unlucky on that occasion," said McGlynn.

"Two-nil would have been a lot better with regard to getting back into it, because 2-0 is sometimes a funny lead to have."

McGlynn insisted Hearts would be prepared for their Scottish Cup clash with arch-rivals Hibernian, who moved up to second place in the Scottish Premier League following victory over St Johnstone.

"We are the holders of the Scottish Cup and we're not going to give that up lightly," he added.

"The attitude of the players has been first class and it will be again on Sunday.

"We've got a big game on Sunday, so you can either slit your wrists or you can step up to the plate. If I slit my wrists it's not much good for the players.

"We have to look for the positives, pick ourselves up and not dwell on tonight."