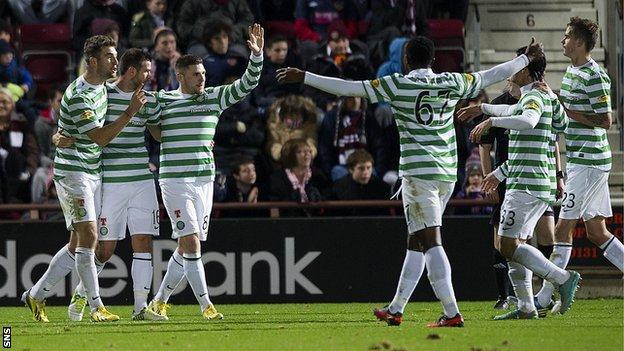 Lennon's side bounced back following a 1-0 home defeat by Inverness on Saturday and kept their place at the top of the Scottish Premier League.

"We played with great intensity and pace to our game," said Lennon.

"It's a great win and puts a different sort of complexion on the table but let's find that sort of form at home and we'll take some stopping."

"They were back to the levels that we know they can play at," Lennon BBC Radio Scotland.

"We looked dangerous. There was a spark about us and a tempo to us that was a lot more like us. It's a great team performance.

"To keep a clean sheet and win as emphatically as we did is really pleasing."

"The double-save he made in the first half [to deny Stevenson and Zaliukas] was top drawer and he made a couple of great saves second half as well," said Lennon of Forster.

"He takes pride in clean sheets and that's another great penalty save."

Celtic begin their Scottish Cup campaign with a home tie versus Arbroath on Saturday ahead of Tuesday's Champions League decider against Spartak Moscow.

"I'll still put a pretty strong team out for Arbroath and we'll take it from there," added Lennon.

"We're going to watch Spartak on Friday; they've got a big game against Zenit. We'll analyze it to death and see where we can hurt them.

"We need to win the game to force Benfica to win in Barcelona so that's what we're thinking about."