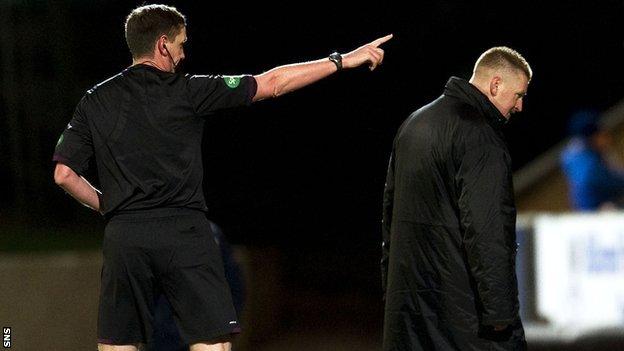 St Johnstone manager Steve Lomas says "frustration" was behind his dismissal to the stand in the defeat by Hibs.

Lomas was given his marching orders after Nigel Hasselbaink took a penalty awarded to Saints, a spot-kick Ben Williams saved.

"I kicked a water bottle," Lomas said. "I said to the fourth official he could've used a bit of common-sense.

"I was a bit perplexed why he was taking it. Dave Mackay's normally our penalty taker."

And he added: "It should've been one of the senior boys taking it, but in the heat of the game he fancied it. We can't criticise him for stepping up."

Mackay was later sent off following an off-the-ball altercation with Leigh Griffiths but not before Paul Cairney had snatched Hibs' winner.

"Dave suggested that Leigh came and put the head to him," said Lomas. "It was a lock of heads and he [referee Craig Thomson] just chose to send Dave off.

"If Dave has [motioned his head] it's stupid."

There was further misery for Saints with David Robertson sustaining a suspected broken leg.

"It's been a disappointing night, especially with Davie Robertson getting that bad injury," added Lomas. "Fingers crossed it's not as bad as we think.

"It looked like a block tackle and it looks like he's come off second best. Very disappointing for the lad and for us."