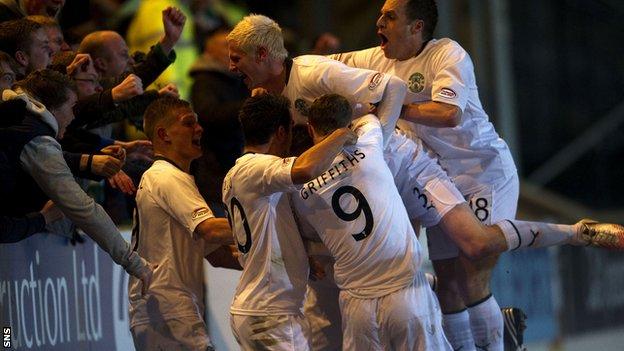 Manager Pat Fenlon praised the resilience of Hibernian after his side eked out a 1-0 victory at St Johnstone.

Paul Cairney slotted in an 82nd-minute winner, not long after visiting goalkeeper Ben Williams had made a fantastic double save from a penalty.

"We didn't play well tonight but we played really well on Saturday and got nothing out of the game," said Fenlon.

"It's three really big points for us and I'm delighted for the players, who showed great character."

The return to winning ways keeps Hibernian within one point of Scottish Premier League leaders Celtic, following defeats to Dundee and Aberdeen.

"We knew coming here would be difficult on the back of two defeats," Fenlon told BBC Radio Scotland.

"In the second half we had to dig in at bit at times."

St Johnstone were handed a great opportunity to break the deadlock when Dave MacKay had his heels clipped by David Wotherspoon and referee Craig Thomson awarded a penalty.

But Williams produced a flying save to push away Nigel Hasselbaink's spot-kick and reacted quickly to block Liam Craig's follow-up shot.

"The rebound was probably a better save because he was moving across the goal and he has to get himself set again," enthused Fenlon.

"You see that a lot, when a team misses a penalty, the other team goes up the pitch and scores.

"The goal seemed to take an eternity to go in as well, it just trickled over the line.

"St Johnstone had a lot of pressure on us without creating loads of chances. They had shots from distance and Ben made a couple of saves.

"But being a good team is defined by how you win matches and lose them and we had to work really hard to get anything from the game."

Hibs were troubled by a number of set-pieces but Fenlon was pleased with how his team coped with the physical challenge.

"With James McPake and Tom Clancy out, it leaves us not the biggest team," he explained.

"So making changes, I was worried about taking taller players off because we did have to defend a lot of corners.

"We're not the biggest team but we have a fair bit of steel within the group."

Hibs have now amassed 27 points from 16 games, which is just six fewer than their tally for all of last season.

"We want to make progress and we are steadily doing that," added Fenlon.

"We are a little bit stretched at the moment with Gary Deegan out, as well as Clancy and McPake - they are big players for us.

"You have just got to hang on until we get those boys back in."