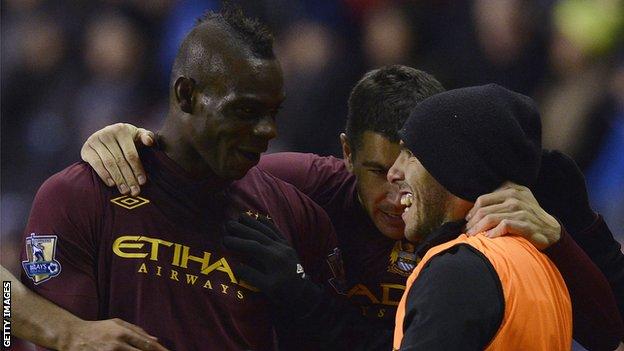 Manchester City boss Roberto Mancini insists he has no plans to sell Mario Balotelli after the Italian striker scored in the 2-0 win over Wigan.

Balotelli was linked with a move back to Serie A after being dropped earlier this season, but he marked his return to the side by putting City ahead.

When asked if he might sell Balotelli in January, Mancini replied "no".

He added: "I am happy for him because he has scored his first goal of the season, and it was an important goal."

It was the former Inter Milan striker's first Premier League goal since a brace against Sunderland at the end of March.

The 22-year-old had fallen behind Sergio Aguero, Edin Dzeko and Carlos Tevez in the pecking order before being sidelined by a back problem.

Before his inclusion in the starting line-up for Wednesday's win at the DW Stadium, he had not started a game since City's 0-0 draw with West Ham at the beginning of November.

Despite Balotelli's goal, Mancini plans to continue to rotate his strikers, and says he will ask for more from Balotelli, with whom he has had a tempestuous relationship.

"I think Mario can do better," Mancini added. "He scored one important goal but he can continue to improve.

Balotelli struck with 21 minutes left after Ali Al Habsi had spilled Gareth Barry's shot, seeing his initial follow up saved by the Wigan keeper but coolly finding the net at the second opportunity.

That gave City the lead in a game that Wigan had controlled for long spells, and James Milner's thunderbolt shot three minutes later ensured Mancini's men collected all three points.

"We knew before the game it would be difficult," Mancini added. "It is the same every time we play Wigan - they play good football and they have a very good manager.

"The first goal was important because it changed the game. After this, everything was good for us and Milner scored a great goal. Sometimes you have to be patient and in the end we deserved the win."

The victory keeps City a point behind United at the top of the table but Mancini feels it is too soon to talk about a two-horse title race.

"We play a lot of games in the next month, and that can change everything," Mancini explained. "After that, in February, other teams will play in the Champions League.

"I also think Chelsea can fight for the title. At the moment it is United and City clear at the top but the season is very long,"