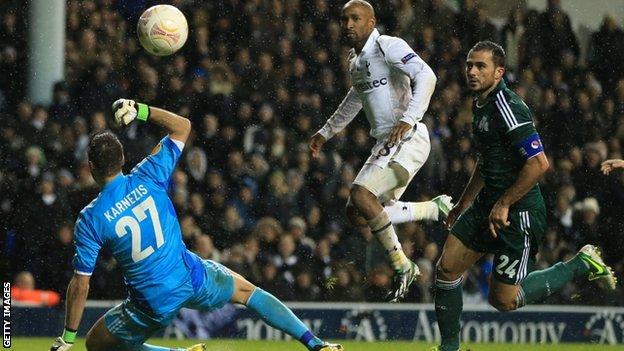 Two late strikes against Panathinaikos eased the tension at White Hart Lane and ensured Spurs progressed to the knockout stages of the Europa League.

Tottenham merely needed a draw to reach the last 32 and were set on their way with Emmanuel Adebayor's opener.

But Zeca headed the Greeks level and a nervy second half ensued until keeper Orestis Karnezis directed Clint Dempsey's header into his own goal.

Vicory was secured when Jermain Defoe dinked in a third late on.

Juan Ramon Rocha, a Spurs fan, took over the helm at Panathinaikos for a second time last month and although his reign as coach has seen an upturn in the club's fortunes, the Greek club's former midfielder played down his team's chances of winning at White Hart Lane.

Panathinaikos would have qualified had they managed to beat Andre Villas-Boas's men but Rocha's pre-match caution rubbed off on his conservative players.

In the absence of the injured Gareth Bale, Dempsey deputised as the home team's tormentor-in-chief, linking cleverly with his strikers and proving a key figure as the Londoners finished second behind Lazio in Group J.

Yet for all of Tottenham's possession they failed to threaten the Panathinaikos goal until a defence-splitting pass from the American set the recalled Adebayor free to score his second goal of the season.

Adebayor's strike was all the more painful for the visitors as seven minutes earlier Toche had wasted their best opportunity of the half.

The Spanish striker had been put clear by a canny Giourkas Seitaridis free-kick, but he could only guide the ball into Brad Friedel's hands, a straight-forward save for a goalkeeper making his first Tottenham appearance in a month.

Tottenham, and Defoe in particular, wasted chances either side of the break. The England striker lashed wildly from six yards in the closing stages of the first half and then hit the post with a low, whizzing effort in the 48th minute.

Despite Defoe's profligacy the hosts were comfortable, unsurprisingly so considering they had won their previous three Premier League games - but there was to be a twist.

And the vocal visiting fans were soon celebrating wildly when Zeca headed a menacing cross from Nikos Spyropoulos beyond Friedel's outstretched frame.

Another Panathinaikos goal could have eliminated the hosts and an off-balance Toche added to the home side's jitters by going inches wide from giving his buoyed team the lead,

It was as close as the Greek outfit got, though, with Dempsey instrumental for Spurs once again.

Kyle Walker's free-kick found the summer signing, whose header ricocheted off the crossbar and into the net via Karnezis.

Six minutes later, Lennon set off on a wonderful sinuous run and released Defoe, who coolly chipped over the diving Karnezis for his 13th goal of the season to rubber-stamp Tottenham's presence in the last-32 draw on 20 December.

Tottenham manager Andre Villas-Boas: "The problem was 1-0 wasn't enough. They had the determination and motivation to get a result. But we played really well and had opportunities.

"We felt a little bit of anxiety but managed to get the result which was fair.

"We've been scoring a lot of goals and I think the team is the second-best attacking team in the Premier League. We create chances and we took our chances."