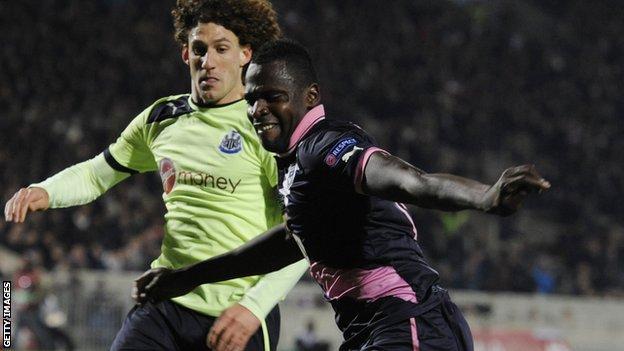 Newcastle lost their unbeaten record in this season's Europa League as they slipped to defeat in Bordeaux.

The result means the French side win Group D, with Newcastle qualifying for the knockout phase in second place.

Cheick Diabate rose above James Perch to head home the first goal before the break, and raced clear to add his second 17 minutes from time.

The relatively inexperienced United side selected by manager Alan Pardew failed to create many chances.

Pardew had revealed before the game that he would not be playing his strongest side in France, preferring to rest many of his squad for Monday's Premier League game against Fulham at Craven Cottage.

He was true to his word, making nine changes from the side that started Only Mike Williamson and Sylvain Marveaux remained, while striker Nile Ranger made his first start for the Magpies since April 2011.

Shola Ameobi, who opened the scoring in Newcastle's win over Bordeaux in October, returned after a groin problem and wore the captain's armband.

Both sides had already qualified for the knock-out stages of the competition, but a win for Newcastle would have guaranteed them first place in Group D and home advantage in the second leg of the next round. The draw for the round of 32 takes place on 20 December.

Rob Elliot, given his fourth start of the season, was by far the busier of the two keepers in the first half, making an excellent one-handed save to deny Henri Saivet in only the second minute.

He was also alert to the swerve on Fahid Ben Khalfallah's shot after 11 minutes to push the chance away, and then dropped low to his left to block David Bellion seven minutes later.

However Elliot could do little to prevent Bordeaux taking the lead just before the half-hour. Khalfallah's cross from the left was met by Diabate, who outjumped Perch and Shane Ferguson to nod the ball down past the static keeper.

Newcastle looked disjointed and did not seriously threaten the Bordeaux goal before half-time.

Newcastle's best spell continued with Mehdi Abeid curling a shot around Olimpa's left-hand post, but at the other end Gregory Sertic scraped the upright with an effort from around 30 yards.

Diabate doubled the lead on 72 minutes, latching on to a long pass over the top to race clear of the defence before shooting through Elliot's legs.

The home side continued to dominate, with Elliot touching a Khalfallah shot onto his post just before the final whistle.