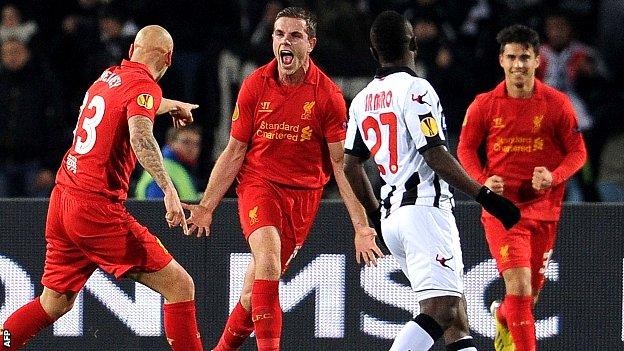 Henderson's low strike midway through the first half ensured the Reds finished top of Group A and qualified alongside Russians Anzhi Makhachkala.

Udinese had Giovanni Pasquale sent off while Antonio Di Natale fired just over the bar with the last kick of the game.

It was a glorious opportunity and would have knocked Liverpool out had it found the back of Pepe Reina's net.

The Reds were able to breathe a huge sigh of relief and can now look forward to the draw for the knockout stage on 20 December.

They arrived in Italy knowing victory offered the only guarantee of progress and Brendan Rodgers named a strong line-up that produced a display combining attacking enterprise with defensive resilience.

Luis Suarez started his first European away match for the club and troubled the Udinese defence throughout, while Jamie Carragher and Martin Skrtel formed an uncompromising centre-back partnership.

Suarez linked effectively with Suso and Henderson from the right, and Stewart Downing and Jose Enrique from the left, as well as with Jonjo Shelvey after he replaced the injured Nuri Sahin early on.

Nevertheless, it was Udinese who threatened first, Mathias Ranegie heading wide and Reina tipping Roberto Pereyra's shot over the bar.

But Liverpool were racing forward in numbers at every opportunity, passing and moving quickly and precisely to expose the hosts.

One such move helped earn them a corner and after Downing's set-piece found its way to Henderson via Suarez and Suso, the 22-year-old drilled a low finish through the legs of Daniele Padelli.

Udinese were still coming to terms with the setback when Liverpool almost struck again, Glen Johnson's close-range strike disallowed after Downing crossed from an offside position.

Diego Fabbrini tested Reina as Udinese looked to reply, yet the lack of confidence that comes with three straight European defeats was clear and Liverpool's well-organised back line stood firm.

Suarez went close with an overhead kick as Liverpool finished the half well and although home coach Francesco Guidolin made a change at the break, he resisted the temptation to introduce Di Natale.

Instead, Medhi Benatia came on and even when he had to go off injured, debutant Max Reinthaler was preferred to the veteran striker.

Udinese did threaten an equaliser when Ranegie headed just over the bar from Pasquale's corner, while at the other end Padelli made a fine save from Henderson's volley and an even better one to deny Suarez.

The Italians lost Pasquale to a second booking but it failed to halt the late momentum and they pushed hard for an equaliser.

Di Natale was finally introduced on 85 minutes and almost stole the show, only to lash over the bar from a superb position.