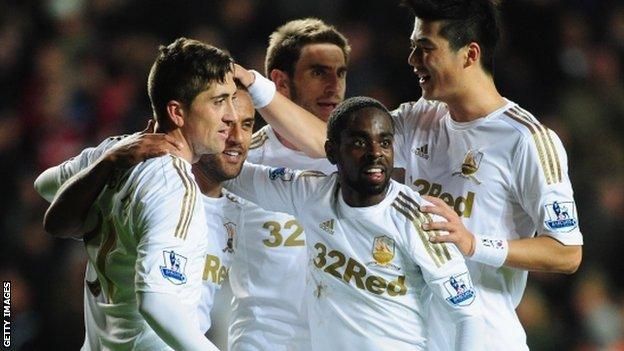 "It was the best I have seen for several seasons," he said.

"It is not often as a manager you can sit and enjoy your team playing.

"Always during a game there are moments when there are things to improve, but the first half was fantastic - all 11 players played one-two touch football and everything was so good."

The only negative for Laudrup was an injury to influential winger Pablo Hernandez, who had a hand in all three Swansea goals.

Hernandez, a Spain international, limped off in the second half and is not expected to recover in time for Saturday's visit to Arsenal.

"It is a small muscle injury and how much it is we have to see in the next two days. I think for Saturday probably he won't be there," said Laudrup.

Hernandez, the club's record signing from Valencia, was central to everything the Swans created against West Brom.

His volleyed pass set up Michu for the opener and then skipped past two defenders before drilling a low cross that Wayne Routledge bundled in for the second.

A measured pass to Ben Davies was his telling contribution in the third goal, again scored by Routledge.

"In the first games he had to adapt," said Laudrup of £5.55m signing Hernandez. "But he's getting better and better.

Twenty points from their first 14 games leaves Swansea six points better off than they were under Brendan Rodgers a year ago in their debut Premier League season.

Swansea went on to finish in 11th place, and Laudrup believes the fine start will allow his players to take on the league's leading clubs - starting with Arsenal on Saturday - without the constraints that comes with the pressure of worrying about survival.

"It's against a big club and away game where we have not so much to lose and we can just go and play our game with 20 points in our pocket. It's nice," he said.