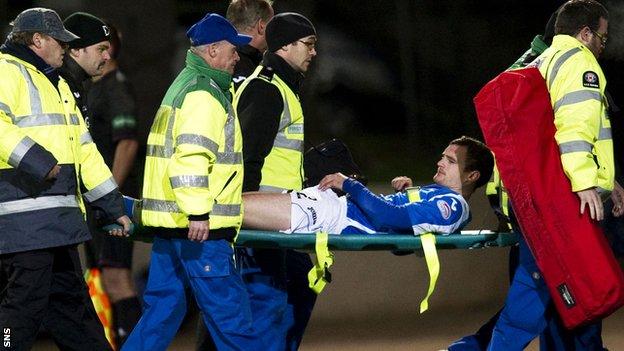 St Johnstone have confirmed midfielder David Robertson suffered a broken leg in the 1-0 defeat by Hibernian at McDiarmid Park.

The 26-year-old will have surgery immediately, the Perth club announced.

Robertson left the field on a stretcher after making a tackle shortly after coming on as a second-half substitute and was taken to Perth Royal Infirmary.

He joined Saints in the summer of 2011 after rejecting a new deal with Dundee United.

However, more than half of his 29 appearances have come as a substitute.

St Johnstone manager Steve Lomas told his club website: "I've been up to see him this morning and he had already seen the specialist who unfortunately has confirmed that it is a break.

"He'll be operated on this afternoon. I'm gutted for him.

"Robbo's a great guy to have around the place and I felt he was showing signs in recent weeks of being able to make a bigger contribution to the team.

"We wish him well and I know the lads will rally round him."