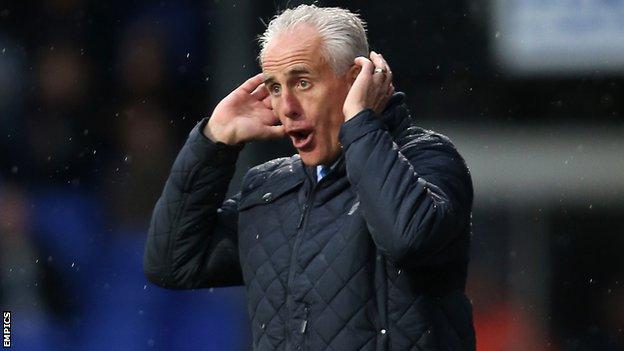 Ipswich Town boss Mick McCarthy has said he is happy with the 10 points his side have collected since he joined the club.

McCarthy has won three and drawn one of his six games in charge of the Championship strugglers.

"When you come in you hope you win all your games. But it was unlikely," he told BBC Radio Suffolk.

Town's results under the former Wolves boss include victories over Birmingham, Burnley and Nottingham Forest, but also 5-0 and 6-0 hammerings by Crystal Palace and Leicester respectively.

The points gained have been enough to lift the Suffolk side out of the relegation zone for the first time since early September.

McCarthy added: "If you look at the games, did I expect to beat Birmingham away? Did I expect to draw with Peterborough? I would have liked to have won that one.

"I've only been here a month. I didn't walk in and know everybody and how they all play. Hopefully we're starting to see a settling down and a settled side."

Ipswich travel to Bolton on Saturday with doubts over the fitness of midfielders Nigel Reo-Coker (hamstring) and Luke Hyam (calf), who scored his first senior goal in

"I still don't know how many games Nigel will miss. But he hopes to train next week," said McCarthy.

"The bigger worry is that Luke Hyam got a kick on his calf and he won't train on Thursday. But I'm hoping he will be OK."