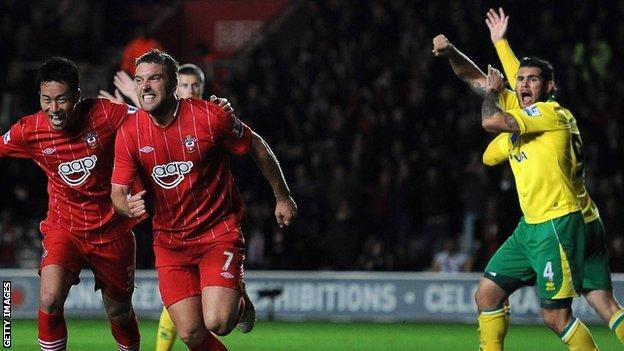 Norwich City boss Chris Hughton believes Southampton's goal in should have been ruled out for handball.

Rickie Lambert appeared to strike the ball with his arm before he put the Saints ahead.

"I think it was difficult for the referee because they worked a very good block and the ball bounces in an area where there's a lot of bodies."

The game marked the return of referee Mark Clattenburg, who was in charge for the first time in four weeks after the Football Association cleared him following Chelsea's accusation of racial abuse against him.

The Canaries players also remonstrated with the official following his decision to award a free-kick for Robert Snodgrass's challenge on Luke Shaw, a set-piece that led to the goal.

"I must admit I'd have to look at it again on whether it's a free-kick," said Hughton. "I thought they got quite a few free-kicks, certainly earlier in the game."

Hughton was given a more reliable performance from his own keeper, with Mark Bunn replacing England's John Ruddy, who has been

"It will be a massive miss. And that's nothing in detriment to Mark Bunn who showed against Southampton and will continue to show the reason we brought him in," said Hughton.

"But it's a big blow. Because you're taking out of your squad a big player, certainly considering the length of time he will be out.

"But of course now it is an opportunity for Mark. We've got absolute confidence in him. He's an experienced goalkeeper and we look forward to John making a full recovery."