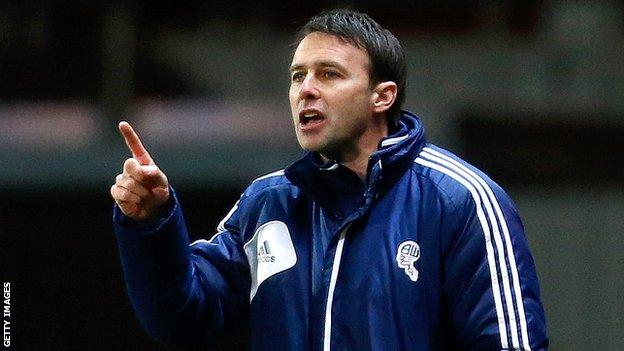 Dougie Freedman says he will continue to rotate his Bolton squad to keep up the fitness levels of his players during the busy Championship season.

Freedman told BBC Radio Manchester: "My job is to make sure we're fresh going into games. I've got to use the squad.

"I know players want to play every week but it's up to me to manage them."

The Scot, who made four changes for the game at Brighton on Saturday, continued: "There are many different personalities and characters in the dressing room and they handle it in different ways. It's up to me, as a coach, to do the best I can for Bolton."

Wanderers have yet to lose under Freedman, winning two and drawing four of their six Championship matches since the 38-year-old replaced Owen Coyle at the Reebok Stadium.

And they ended a sequence of four consecutive draws with victory against Rovers, with Freedman describing his team's overall display as the best since he took charge.

"It was a great team performance. From the first whistle, we passed the ball well and controlled the game," he continued.

"Credit to them, they kept on going and we knew they would come back at us. The last 15 minutes was about defending and desire to put your body on the line and we did that."

Goals from Kevin Davies and Lee Chung-Yong put Bolton in control, and they held on for victory despite a late reply from Blackburn striker Jordan Rhodes.