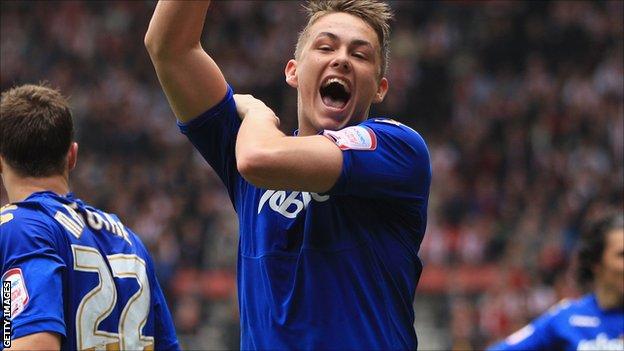 Portsmouth midfielder Scott Allan has extended his loan deal at Fratton Park for a further month.

Scotsman Allan, 21, has played four times for Pompey since joining on loan from West Brom in October.

His spell at Fratton Park had been disrupted after he was sent off against Notts County in the FA Cup meaning he was given a three-match ban.

Allan, who cost the Baggies £300,000, also spent some of last season on loan at Portsmouth, playing 15 times.

And Portsmouth caretaker boss Guy Whittingham was delighted to secure his services for a further month.

"Scott has agreed to sign for another month so that is good news for us. I am pleased to get that done," Whittingham told BBC Radio Solent.

"He can be influential has got good ability, can see a pass and unlock defences."

Meanwhile, Whittingham has revealed that Portsmouth have been refused permission from the Football League to bring another goalkeeper into the squad.

Whittingham, who now only has 19 players in his squad, saw keeper Alex Cisak return to parent club Oldham on Wednesday.

It has left Whittingham with just one keeper, 23-year-old Simon Eastwood, in his squad.

"We know the situation and we are disappointed," he said.

"But we've got Simon Eastwood so that's who we'll go with. We've got no qualms with that. If something happens to him then we can bring in someone on an emergency loan."