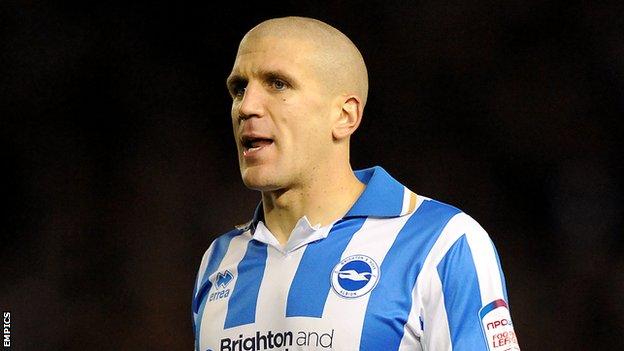 Brighton defender Adam El-Abd says their players will have to keep calm during the derby match against Crystal Palace.

The Seagulls travel to face their rivals at Selhurst Park on Saturday.

He told BBC Sussex: "It's one everybody looks for when the fixture list comes out. We all know it's going to be highly charged.

"People will need to be calm in the dressing room as it may be easy to get caught up in it and get over-excited."

The rivalry between Brighton and Crystal Palace was at its height in the late 1970s and the 1980s.

However the sides have only met six times in the past 10 years:

Brighton will come up against their former striker Glenn Murray and Palace's star winger Wilfried Zaha in south London this weekend.

Murray, who spent three and a half years with Albion before joining the Eagles last summer, has scored 15 goals in as many league games this season.

Zaha made his international debut for England against Sweden earlier this month.

"Glenn is a good player and so far he's had a good season," El-Abd said.

"Given the right service he can put the ball in the back of the net. It will be our job to make sure that doesn't happen.

"We've got our work cut out but we look forward to the challenge and will be up for it to say the least.

"We have got players in our ranks we think are as good as what they have got to offer."

Both sides are challenging for promotion to the top flight, with Palace lying second in the table and Albion on the verge of the play-off places.

"We've been ticking along quite nicely and it bodes well for the rest of the season," El-Abd continued.

"We've quietly crept up the league and have got ourselves into a good position. If we turn them over we'll be within three points of them.

"There is still a long way to go but the signs are good."