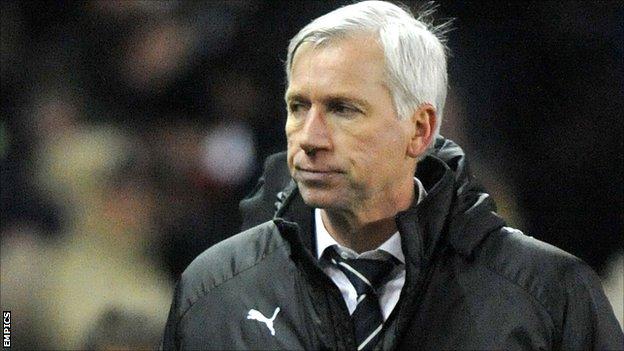 Manager Alan Pardew believes Newcastle United were unfortunate to leave the Britannia Stadium without a point after an improved display against Stoke City.

Papiss Cisse gave the Magpies a lead that they were unable to hold, as Jonathan Walters and Cameron Jerome struck to

"It's galling to walk away with nothing," Pardew told BBC Newcastle.

"Anyone associated with Newcastle would feel that. We're disappointed because we deserved something."

Pardew's side has been cut down by injuries to playmakers Hatem Ben Arfa and Yohan Cabaye, as well as defender Steven Taylor - all influential players in last season's fifth place Premier League showing.

Such absences have coincided with a four-match winless run, the longest sequence without success for Newcastle since 2008, and a booking for James Perch means he will miss Monday's visit of Wigan.

"Obviously it's our fourth defeat in the Premier League, and it's hard to take," Pardew said.

"Perch knew he was on four, so he knew he was missing the next game and we can't even play the same team.

"We're having that kind of season. We have to work our way through it. We've changed some things that worked for us tonight. We don't need to go back to the drawing board."

One bonus for Pardew amid the disappointment was the end of Cisse's scoring drought after four games without a goal.

The 24-year-old striker racked up 13 goals following his £9m move from Freiburg in January last season, but has been limited to four in all competitions this term.

"I was pleased with the two strikers tonight [Cisse and Demba Ba] they really worked hard tonight," Pardew continued.

"Their attitude and everything about them deserved something."