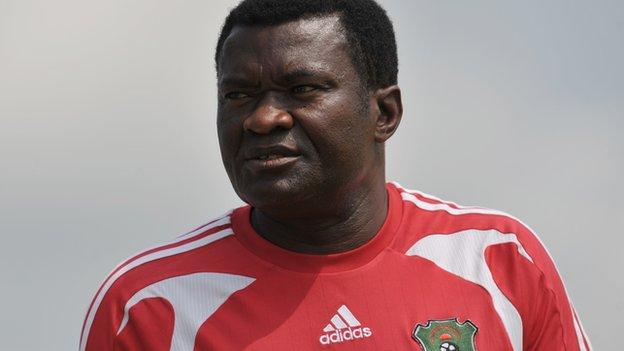 Khamis grabbed his second when finishing off Kassim Sulyeman's curving pass as a Rwanda side that had poured on the pressure suffered from a communication lapse in defence.

Late on, Dady Birori pulled one back for Rwanda with a well-taken header from a Haruna Niyonzima cross but it was too little too late.

This is the tournament where [the technical team] have to show they can do something. In other matches they had excuses which we could understand but not Cecafa.

After two rounds of matches, Zanzibar are unexpected Group C leaders with four points, while second-place Rwanda boast three - the same as Malawi, who narrowly beat Eritrea 3-2 earlier in the day.

"My boys failed to master how to play on a wet pitch and also made some terrible mistakes," said Rwanda's Serb coach Sredejovic Micho. "But we shall fight back in our last group game."

Meanwhile, Zanzibar coach Salum Nassor was an understandably delighted man after the encounter.

"Beating Rwanda has always proved difficult for us, but we have done it today," he said.

Zanzibar's victory throws the group open but Malawi know they will qualify for certain with victory in their final group game against the islanders on Monday.

Kinnah Phiri is a man under pressure after Malawi minister of sports Enock Chihana warned that the Flames coach faces the axe should he fail to reach the quarter-finals.

"We have given them enough time to prepare and this is the tournament where they have to show that indeed they can do something," he said.

"In other matches they had excuses which we could understand but not Cecafa.

"If they qualify for the quarter-finals, it's completely a different matter. If they don't, it means my ministry, the council for sports and Football Association will sit down and make a decision," Chihana added.

"I am very bitter with my players for giving the opponents space to score such goals," Phiri said afterwards. "This is a game we should have won comfortably, but we ended up struggling."

Hosts and defending champions Uganda, who are already through to the last eight, return to action on Friday against South Sudan, while Ethiopia face Kenya in what promise to be a tough Group A contest.

The Harambee Stars need to avoid defeat against the 2013 Africa Cup of Nations qualifiers to be certain of making next week's quarter-finals.