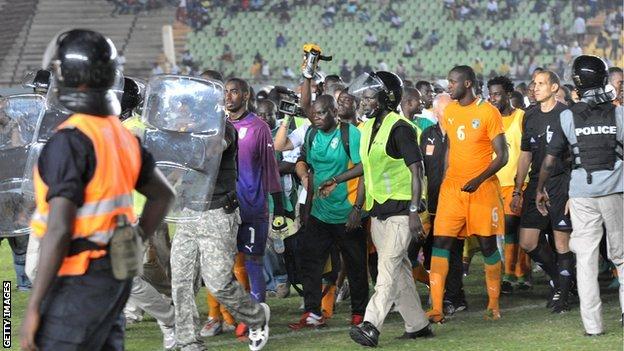 The Confederation of African Football has barred Senegal from using Dakar's Leopold Sedar Senghor stadium for international games for one year as punishment for rioting at a match in October.

The Senegal Football Federation (FSF) has also been fined US$100,000 for the crowd violence that broke out at the 2013 Africa Cup of Nations qualifier against Ivory Coast.

The Teranga Lions must now find another venue for next year's 2014 World Cup qualifiers against Angola and Uganda.

Senegal were disqualified from the Nations Cup shortly after a match which was abandoned after 76 minutes, with fans throwing stones onto the pitch as the Senegalese trailed 6-2 on aggregate.

Half of the fine has been suspended providing there are no similar incidents for the next two years.

In 2007 Togo were punished after crowd trouble by home fans when the Hawks were eliminated from the 2008 Nations Cup by visitors Mali.

Togo had to play their next three competitive games at a neutral venue and barred from hosting a match at their national stadium for six months.

Caf's disciplinary board issued several other sanctions at the same meeting.

Al Ahly of Egypt must pay US$20,000 after large photos of fans who lost their lives in February's Port Said stadium disaster were displayed at the first leg of the African Champions League final.

The sanction came after Caf said its directives not to cover one of the stands with the photos was ignored.

Elsewhere, Togo, Malawi, Al Hilal of Sudan and Esperance of Tunisia were all fined varying amounts for fan related trouble during and after matches.

Mali's Djoliba were warned that they face severe punishments if there is a repetition of the pitch invasion that marred their Confederation Cup game against Al Hilal.

TP Mazembe striker Tresor Mputu Mabi must pay US$5,000 for showing a religious slogan on a shirt after scoring against Esperance of Tunisia in the Champions League.

Former Kenya coach Francis Kimanzi has been fined US$10,000 and suspended from four Caf matches for throwing a bottle of water towards an official during a Nations Cup qualifier with Togo.