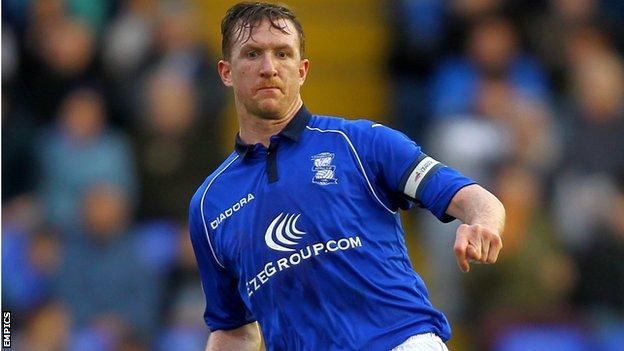 Birmingham City skipper Steven Caldwell has vowed to prove Blues boss Lee Clark wrong after his shock at being dropped at Blackpool on Tuesday night.

Blues improved on Saturday's 3-2 defeat at Derby by coming from behind to draw 1-1 on a foul night at Bloomfield Road.

But Caldwell insists: "I'm here to play football. I want to play games.

"I'm not going to throw my toys out of the pram. I'm going to roll my sleeves up and prove the manager wrong," the 32-year-old Scot told BBC WM.

Clark described his captain Caldwell as a "great example to any young player" when he took over in the summer.

But he made his decision to axe Caldwell as part of a major defensive reshuffle at Bloomfield Road, with Paul Caddis and Pablo Ibanez both earning recalls, after shipping six goals in back-to-back 3-2 defeats by Hull City and Derby.

And not only will Clark have been delighted by the response on the pitch on a miserable, wet evening in Lancashire, but also by Caldwell's response off the park.

"It's always hurtful when you get dropped. And God knows I've been dropped a few times in my career.

"Nobody should be picked on name, only on how they perform. And my pride hurts a little bit as I don't feel I deserved it.

"Being captain, this is a club that's close to my heart. I want success for Birmingham City and, if I'm not out there, I can't do anything to help that.

Nobody should be picked on name, only on how they perform. And my pride hurts a little bit as I don't feel I deserved it

"But the main thing is how you react and I'll be out on the training ground giving 100% and showing the manager that he was wrong to drop me."

Caldwell is also insistent that, having slumped to 19th in the Championship, just six points clear of the danger zone, it is high time Blues rediscovered the sort of form that took them to the play-offs last season under Chris Hughton.

Friday night's home clash with Middlesbrough marks the start of three home games out of four up to Christmas although the Blues badly need to improve on a record of just three wins in nine games at St Andrew's this season.

"We are under-performing as a football team," admits 12-times capped former Scotland international Caldwell. "We should be higher than we are.

"It was very encouraging at Blackpool. On a tough, tough night, we played the conditions extremely well and did it better than Blackpool.

"But it's time to stop the talking and finally deliver. It's now or never."