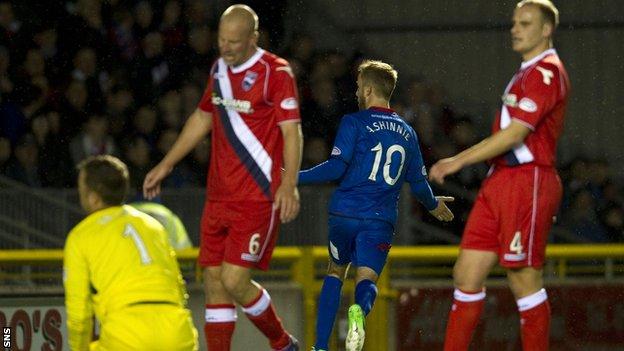 Ross Tokely has hit out at the fans of former club Inverness Caley Thistle for the abuse he received on his return as a Ross County player in October.

County have the chance to avenge that 3-1 defeat when their neighbours visit in the Scottish Cup fourth round.

Tokely spent his career at Caledonian Stadium until his summer switch.

"I was really disappointed the last time - 16 years service and to get booed like that, I thought it was a disgrace," said the 33-year-old.

"If people want to come out and boo me, that's up to them, but I'm a Ross County player, I've got a job to do and I will give it my all.

"I am just focused on getting the win and playing well. I'm back in the team and enjoying my time here."

The previous match was the first Highland derby to take place in Scotland's top flight and Saturday's will be their first meeting in the Scottish Cup.

It is one of three local derbies in the fourth round, with holders Hearts facing SPL rivals Hibernian and Stenhousemuir hosting Falkirk.

"I was maybe looking for a game from which it would be easier to progress, one of the lower-league teams," Tokely told BBC Scotland.

"But, as soon as the draw came out, it was one I was looking forward to.

"Our supporters certainly backed us very well at Inverness - credit to them, they sang the whole game.

"I'm sure it's going to be a typical cup tie. It is a tight wee stadium and it will be rocking on Saturday."

The respective managers have said their rivals are favourites for the tie.

"I think, going on league form, Inverness are favourites," Tokely said of the side who now sit third in the Scottish Premier League.

"They are on a remarkable run and they are up there. Credit to them. But, in the Cup, form goes out the window."

"We have done well here against Inverness in the past," he said.

"We have to do better than we did the last time - we did not do enough to win the game at Inverness.

"We both would have probably preferred to play each other later in the tournament.

"I am sure it will be a great occasion."

Meanwhile, Adams is hopeful of tying up goalkeeper Mark Brown, who is signed until January, on a contract extension until the end of the season.