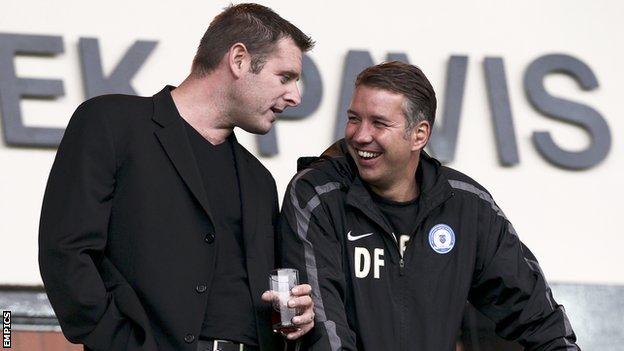 Posh are currently bottom of the Championship and have gone six games without a win.

"I had a good two and a half hours with him," Ferguson told BBC Radio Cambridgeshire. "It was a fantastic meeting. I probably needed it really.

"He was really positive. Full of encouragement."

Ferguson's first spell as Posh boss ended with the pair falling out, only for the Scot to return to London Road in January 2011, 14 months after his initial departure.

MacAnthony said at the time they reconciled with a hug and a "tear jerking" conversation.

And Ferguson has said the presence of the American-based Posh owner has helped him through a tough series of results.

"He picked me up. It was good. We've got a really good relationship and always have.

"It wasn't so much an arm around the shoulder it's just that sometimes he has to motivate me like I do my players and staff."

Ferguson is waiting on news over the fitness of Striker Saido Berahino.

The 19-year-old has returned to his parent club West Brom to have a knee injury assessed and is a major doubt for the weekend visit of Blackpool.