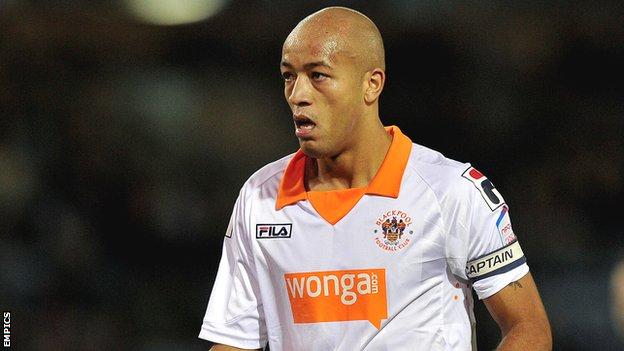 Captain Alex Baptiste says the poor condition of the pitch at Bloomfield Road is not helping Blackpool end their long winless run at home.

The Seasiders have not won a home fixture

"It's so hard to move the ball quickly because you've got to watch your touch and watch where the ball is going," he told BBC Radio Lancashire.

"That's what is killing us at the moment but we can't use that as an excuse. We've got to get on with it."

The 26-year-old defender added: "Once we get a win, I'm sure we'll kick on. It's just getting that elusive win."

Manager Michael Appleton is equally as unimpressed with the Bloomfield Road surface, adding: "It's the same for both sides, but it's not conducive to playing good football.

"It's a problem we've got to cope with. It's not great if you want to pass the ball quickly with one, two and three touches.

"Sometimes it can be a leveller for the opposition and it gives them a better opportunity to get something from the game.

"When the pitch is like it is, it makes it doubly difficult to get in behind teams and play through them."

A on Tuesday made it seven home games without a win for the Lancashire side.

Blackpool, who have now face have back-to-back away matches in the Championship, starting at bottom club Peterborough on Saturday.

"Joking apart, I genuinely think the lads will enjoy going somewhere where they can be solid, get a platform in a game and hit teams on the counter attack," said the former Portsmouth manager.