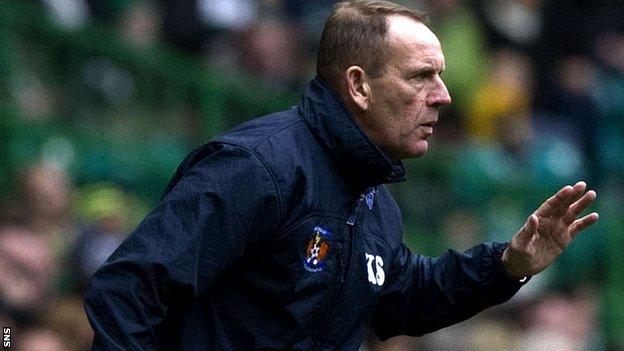 Kilmarnock manager Kenny Shiels insists he will not be silenced as he faces two notices of complaint from the Scottish Football Association.

"I will not lie down, that's not in my nature," he told BBC Scotland.

"I will fight all corners for my football club. I am determined to defend them.

"If we are being malpracticed (sic) against, and I'm not saying we are, but if we were, it's important that I fight that corner."

Shiels has been asked to explain critical remarks made about referee Euan Norris after his side's defeat to Inverness on 3 November.

And he faces further scrutiny for his behaviour following his dismissal during Saturday's loss to St Johnstone, with a hearing set for 13 December.

The 56-year-old Northern Irishman alleges that he has been told that the football authorities are keen on making an example of him.

Without revealing his sources, he suggested that Kilmarnock's recent successful appeal against a red card shown to goalkeeper Cammy Bell had stung those in charge of disciplinary matters at the SFA.

"I've been told they are going to get us by people," he explained.

"And the Cammy Bell case, winning that, hasn't helped, I'm told. That's not my opinion.

"I have to choose my words in every interview now but I would prefer to speak more openly because that's the way I am.

"Unfortunately, I'm not getting the opportunity to do that."

Shiels said he would wait and see wait and see the wording of the charges against him before deciding if he would appear at the hearing next month.

"If there is anything in the report that's not correct, I'll be very disappointed," he said.

"I don't know how they are going to manufacture this to get me because I've contested two refereeing decisions without abusive language, without any form of disrespect.

"I know I'm not against referees, I'm a supporter of referees; it's a difficult job."