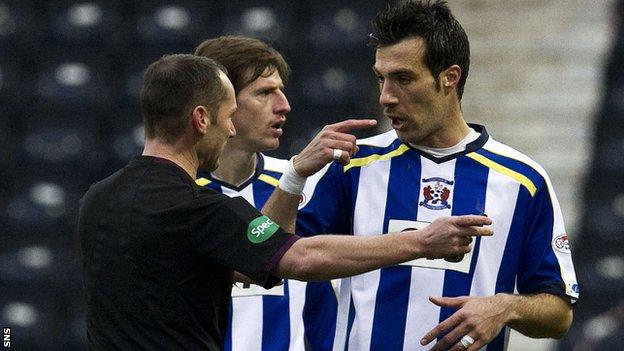 Kilmarnock have failed in their bid to have captain Manuel Pascali's weekend red card overturned.

The Italian defender was sent off for a fifth-minute challenge on St Johnstone forward Nigel Hasselbaink.

Kilmarnock manager Kenny Shiels was sent to the stand by referee Stevie O'Reilly after disputing the decision.

But a fast-track tribunal convened by the Scottish FA rejected the club's position and Pascali will serve a two-match ban for serious foul play.

Pascali will miss Saturday's Scottish Cup fourth-round clash against Queen of the South and the visit of Scottish Premier League leaders Celtic the following weekend.

Speaking before the verdict on Pascali's appeal, Shiels remained adamant the sending-off was the wrong decision.

"I think harsh is the biggest understatement of the season," said Shiels when asked again about the red card.

"For people to say it was a two-footed tackle is unbelievable when he leads with the left foot, which was on the safe side of the opponent and his right leg, the near-side leg, is bent.

"It's incredible how the referee arrived at that decision, absolutely incredible."