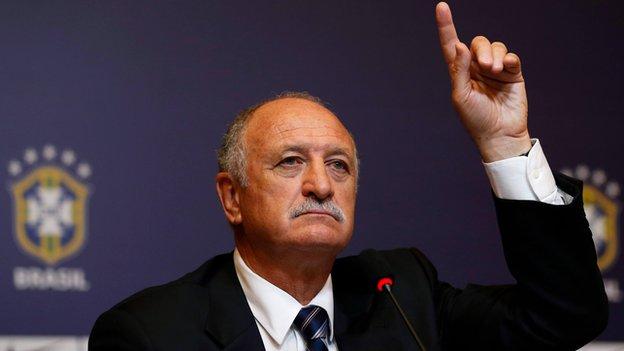 When Brazil sacked national team coach Mano Menezes last Friday, their line was that they were looking for a "new methodology" - which turned out to be not so new after all.

Instead the clock was turned backwards. The replacement coach is Luiz Felipe Scolari, who led Brazil to triumph in 2002. Supporting him is the new co-ordinator Carlos Alberto Parreira, Brazil's World Cup winning boss in 1994. The new broom had been forgotten. Instead, Jose Maria Marin, octogenarian president of the CBF (Brazil's FA), kept stressing that the duo were tried and tested - and Brazilian.

The shadow of former Barcelona boss Pep Guardiola hung all over the press conference, staged in a Rio hotel on Thursday morning. When Menezes was sacked the idea of Guardiola as coach of the Brazilian national team did not remotely figure in the plans of the CBF. Scolari was always the front runner.

Indeed, one of the reasons for the strange timing of the decision to sack Menezes - at the very moment when results and performances were looking promising - is that Scolari is now free.

Back in August, when Brazil lost in the final of the London Olympics, Scolari was still under contract to Palmeiras. The original plan, then, was for Scolari to step into the Brazil job, with the official announcement coming in early January.

But Brazil's sports daily 'Lance!' quickly entered the fray. Publisher Walter de Mattos has good contacts with Guardiola. As soon as he discovered that Menezes was on the way out, Mattos was on the phone trying to discover whether Guardiola would be interested in taking charge of Brazil.

The answer was an emphatic yes - indeed, the message was that the Brazil job would be the only thing capable of forcing Guardiola to interrupt his sabbatical.

'Lance!' then became the headquarters of the pro-Guardiola campaign, shouting out the news of his availability, putting forward the case for Brazil's first foreign coach and then watching Guardiola's name soar to the top in many of the opinion polls.

The CBF decided to act quickly to halt the pro-Catalan bandwagon. A January announcement was brought forward to next Tuesday - then to this Thursday morning.

The cover story was that pressure had come from Fifa, who wanted Brazil to have a coach present for the Confederations Cup draw, taking place in Sao Paulo on Saturday. But the behaviour of Marin at Thursday's press conference gave the game away.

He opened with an address thanking those who had pushed the claims of Guardiola, who he was careful not to mention by name. But, he said, Brazil was in the happy position of having plenty of competent, dedicated coaches worthy of the opportunity of taking charge of the national team.

Furthermore, the foreign option had only ever coached a club. The duo either side of him (Scolari and Parreira) were rich in experience with national teams and were respected all over the world.

Marin later closed the conference with an impassioned, almost tearful plea for Brazilians to give more value to their own things, and said that the majority of Brazilian supporters would be applauding the decision he had taken.

Perhaps. There are many, 1970s great Paulo Cesar Caju foremost among them, who see the decision to overlook Guardiola as a massive missed opportunity, a chance spurned for Brazil to get in touch with their old, romantic ball-playing essence which won so many hearts and minds all over the planet.

Scolari certainly has a kind of father figure charisma that plays well in Brazil. Aesthetic considerations, though, will not be very high on his list. He is a dyed in the wool pragmatist. But that does not make him easy to pigeonhole. He made his name in the 90s with rugged club sides which tended to play 4-4-2 with a big, target man striker.

But when he got his hands on the national team in 2001-02 he did something completely different. When he took over, not even Scolari himself could imagine that he would end up playing with three centre backs and a front three of Ronaldo backed up by Rivaldo and Ronaldinho. But he saw it as the best way to take advantage of the characteristics of the players available to him.

As local commentators have pointed out, his Palmeiras team (he was sacked with the club deep in relegation trouble - they have subsequently gone down) at times resembled something from American football - looking to gain 'yardage' until their free-kick specialist was within range of goal.

With Brazil, though, he will surely try something more expansive. The only certainty at this point would seem to be that some of the old guard are in line for a recall.

When he names his first squad - for the match against England at Wembley next February - it will be fascinating to see how many changes he makes from the group he inherits from Menezes.

Scolari was quick to play down the pressure he will now be facing. Things were worse in 2001, the previous time he took the job.

Then he was in danger of becoming the first coach to fail to qualify Brazil for a World Cup. But he is well aware that the stakes are high. "Brazil have an obligation to win the 2014 World Cup," he said on Thursday. Fall short and he will never be allowed to forget it.

But if history repeats itself, and he takes them to the trophy as he did in 2002, then the legend of 'big Phil' will become bigger still.