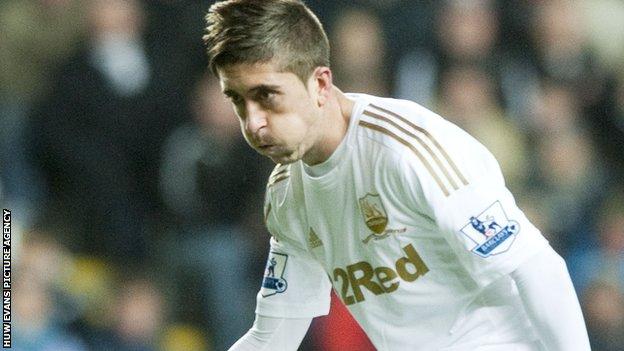 Swansea City are expecting to be without Spaniard Pablo Hernandez for up to 10 days.

The winger will miss the trip to Arsenal on Saturday and possibly the home clash with Norwich City on 8 December.

Hernandez, a summer signing from Valencia, has been ruled out with a thigh muscle problem.

He picked up the injury in Swansea's 3-1 victory over West Bromwich at the Liberty Stadium on Wednesday night.

Hernandez, who is likely to be replaced by Jonathan de Guzman, played a significant part in all of the Swans' three goals in an impressive first half display.

And midfielder Leon Britton hopes the Swans can take that form to the Emirates Stadium and leapfrog Arsenal into sixth place.

Swansea are a point behind seventh-placed Arsenal and six points off the top four after the West Brom victory.

Ex-Arsenal trainee Britton believes Michael Laudrup's side are capable of getting a result at the Emirates.

"If we win on Saturday we go above Arsenal," Britton said.

"It's great going to Arsenal and they're one place above us.

"It's been a good start but there's still a long way to go, but we'll go to Arsenal and it's a great place to play football.

"You can go there with a little bit of pressure off but at the same time we want to try and put a performance on and come away with something.

"We don't want to turn up and make the numbers up."

Britton began his career as a trainee at Arsenal before moving to West Ham for £400,000 in 1998, the highest transfer fee ever paid for a 16-year-old at the time.

The 30-year-old played in Swansea's narrow 1-0 defeat at the Emirates last season and also featured in the 3-2 home win over Arsene Wenger's side later in the campaign.

Laudrup's side go into Saturday's game having lost only once in their last nine games and on the back of an impressive victory over West Brom.

The Swansea manager said Wednesday's victory at the Liberty Stadium was the best performance he had seen for "several seasons".

Midfielder Britton says the victory was one of Swansea's best displays since their promotion to the Premier League.

And the ex-West Ham player believes Swansea's brand of attacking football under Laudrup is paying dividends.

"It's arguably our best performance, the [opening] 45 minutes anyway. It was great to play in," Britton added.

"Everything seemed to be going for us in the first half. We kept the ball well, we had a lot of chances and everything just seemed to click. There's more goals in the team.

"The only disappointment was conceding just before half-time.