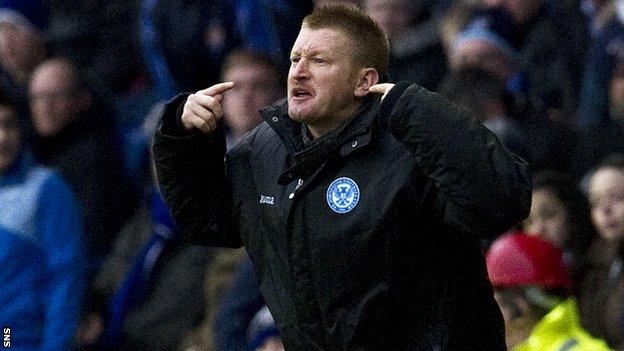 St Johnstone are unlikely to appeal the eight-match ban handed to manager Steve Lomas for using "abusive language towards a match official".

His punishment was increased since he had a suspended two-game ban for his conduct at Ross County in September.

The club had five days to appeal, but it looks like they will accept the ban.

Saints chairman Steve Brown says he has backed Lomas in the past, but "when it comes to foul and abusive language involving referees", he cannot.

Brown told BBC Scotland: "We have spent a lot of time and effort getting the family stand up and running, then from time to time he comes out with foul and abusive language."

Lomas was again sent off during Wednesday's 1-0 loss to Hibs but that has yet to be taken into account.

The former Northern Ireland international revealed that he had apologised to referee Iain Brines after St Johnstone's 1-1 draw at Celtic on 11 November.

Lomas had clapped sarcastically when asked to leave the dug-out for his angry reaction to Celtic's Tony Watt coming on after receiving treatment off the pitch to directly join an attack.

"It's a passionate game," said Lomas at the time. "I've apologised for my language, but at the end of the day, that could have cost us dearly."

His earlier suspended ban was incurred for comments made about Ross County defender Grant Munro.

He suggested that the player had gone to ground rather easily in an incident that led to Saints striker Rowan Vine being sent off.

Lomas was dismissed by referee Craig Thomson in the home match with Hibs moments after Nigel Hasselbaink had missed a penalty kick.

"I kicked a water bottle," was his explanation afterwards. "I said to the fourth official he could've used a bit of common-sense."