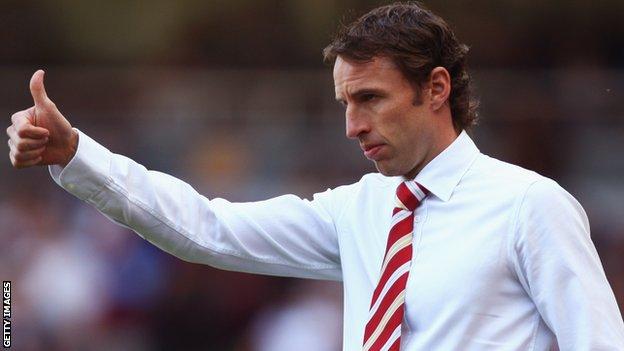 But Southgate claims some fans would not be so tolerant towards homosexual players open about their sexuality.

He was speaking after Manchester United keeper Anders Lindegaard said "homosexuals are in need of a hero".

Southgate told BBC Sport: "I'm sure there might be some reaction from crowds, but within dressing rooms I think it would be accepted."

Who is Anton Hysen?

The son of former Liverpool player Glenn Hysen, Anton came out as gay in an interview with a Swedish football magazine. The 21-year-old plays for Swedish lower league side Utsiktens BK.

Despite a number of high-profile male and female athletes choosing to go public with their sexuality in recent years, the only footballer to come out as a homosexual since the late Justin Fashanu in 1990 is Anton Hysen, a Swedish lower league player.

"It will take someone who is brave enough to be open and honest," added former Middlesbrough manager Southgate in an interview with BBC's Richard Conway at a charity event for the England Footballers Foundation, which was set up in 2007 with players donating their England match fees to good causes.

"Players mix with players of different nationalities, races and religions so I don't see it being an issue in the dressing room.

"We can't control the reaction of all supporters, so unfortunately there will always be a adverse reaction to parts of society. But the honest answer is that we don't know until somebody steps forward."

Earlier this week, Lindegaard wrote in a blog that the nature of supporters on the terraces does little to encourage homosexual players to be open about their sexuality.

"Homosexuals are in need of a hero," he said.

"They are in need of someone who dares to stand up for their sexuality. But homosexuality in football is a taboo subject and the atmosphere on the pitch and in the stands is tough.

"As a footballer, I think a homosexual colleague would be afraid of the reception he could get from the fans, but my impression is that the players would not have a problem accepting a homosexual.

"The problem for me is that a lot of football fans are stuck in a time of intolerance that does not deserve to be compared with modern society's development in the last decades.

"While the rest of the world has been more liberal, civilised and less prejudiced, the world of football remains stuck in the past when it comes to tolerance."