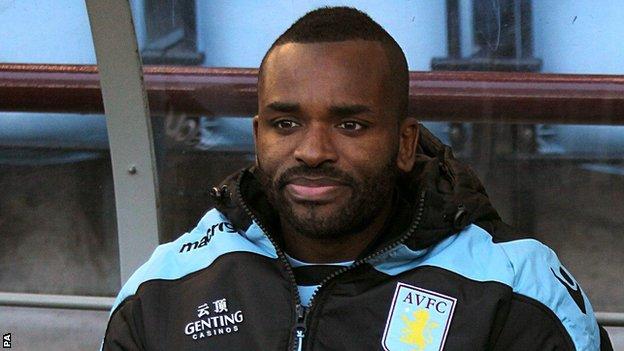 Aston Villa boss Paul Lambert insists it is "pure fabrication" to suggest Darren Bent is not featuring because of financial reasons.

The £24m forward was left in the stands for the club's last two games despite being passed fit after an ankle injury.

Rumours have grown that the club record signing is missing out because of a clause stating more money has to be be paid if he makes 50 league appearances.

"It is nowhere near anything of that whatsoever," said Lambert.

"You get knocks in football, but it is how you bounce back from them."

Bent, 28, has scored twice in nine league games for the Midlanders this term.

He joined Villa in January 2011 and remains stuck on 47 top flight appearances, with Lambert preferring to use summer signing Christian Benteke as a lone frontman since the 4-1 defeat by Southampton in September when the strikers were paired together.

"The system at the minute is definitely suiting us," Lambert told BBC Radio 5 live. "Gabriel Agbonlahor, I think, is playing at the top of his game, Andreas Weimann has energy to burn and Benteke, I do not want to say he is the complete player because he is not, but he has been absolutely brilliant.

"His goal ratio is frightening from the national team to coming here, and he is leading the line exceptionally well."

Villa, who moved out of the Premier League bottom three thanks to Benteke's late goal against Reading on Tuesday, travel to bottom-placed Queens Park Rangers on Saturday.

Lambert, 43, said: "If you look at the middle of the table and down, it is very, very tight. Another win can take you up there and that is what we are going to try and do.

"I have a young team that is doing well at the minute, and they are giving everything they have got. For me, that is the main thing and we keep going as a group."