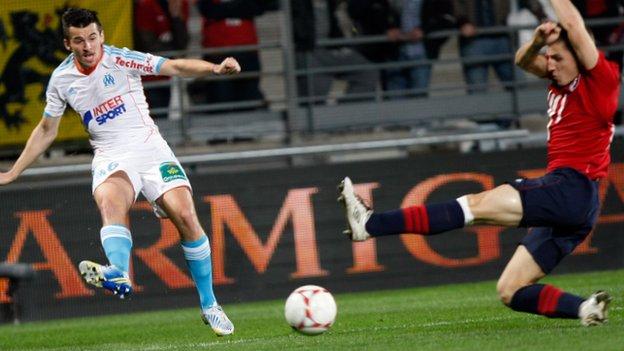 I've not done this for a while so be gentle with me - I promise to try and return to some sort of regularity.

It's been a crazy old season really. Champions League-winning manager Roberto Di Matteo was the first Premier League boss to get the sack and, until last week, my mildly deranged West Brom comrade thought the Baggies were going to win the title. He's now worried they'll go down - such is the fickle nature of football.

Part of my push back towards the blogosphere came from a trip to Marseille this week to see Joey Barton. I know what some of you are thinking… "why are you even giving him air-time?".

The trip was planned long before Monsieur Barton's audition for the remake of 'Allo Allo' but the coverage this week has proved he remains newsworthy. When you watch the interview on Football Focus this Saturday at 12:15 on BBC1 you'll see that he doesn't struggle with opinions and expresses them in a way that always makes him an interesting interviewee.

He took us on a little tour of Marseille. We wandered around the club's incredible training ground and revisited the scene of this week's infamous news conference - a video of which has already been watched well over a million times on the internet.

You'll see he deals with it well, seeing the funny side, and feels that Steve McClaren's dutchglish is much better than his franglaise.

We do cover some more serious issues with him too. There is no denying that Barton has been foolish in the past and done some things he genuinely regrets. He is a complex character and admits to being hypocritical at times - preaching peace and classic philosophy and then elbowing Tevez, kicking Aguero and generally raging his way down the tunnel.

His description of that incident in the final game of last season for QPR against Manchester City and what was going through his mind makes for interesting viewing.

You might not agree with his analysis but, despite his self-confessed flaws, Barton always leaves you with something to think and talk about.

You'll also hear him talk about QPR, Harry Redknapp replacing Mark Hughes as manager, and the chance of coming back to play in England at some stage.

I'm not sure we'll see him for a while though because he loves Marseille and their loyal fans have fallen in love with him. We went to their league defeat to Lyon on Wednesday and spoke to plenty of supporters beforehand who were very proud to have him in their side. They couldn't understand why "you silly English" - as one put it - would pillory him for trying to make himself more easily understandable to the French press and public.

Whenever I mention Joey Barton on here I know some people get very animated. I'm looking forward to seeing what you think of the piece and will try to come back and respond to any questions or comments you make below.