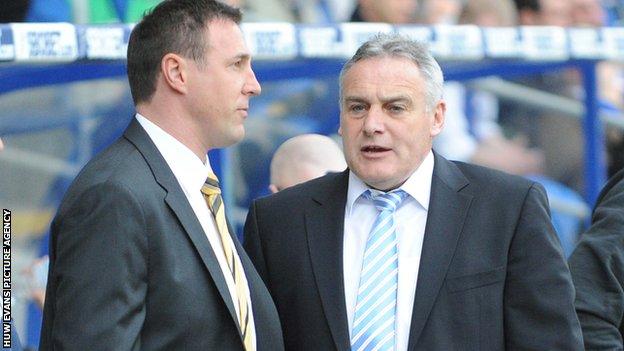 Malky Mackay hopes Cardiff fans give ex-manager Dave Jones a warm welcome on his return to the Welsh capital.

Jones returns to the Cardiff City Stadium for the first time with Sheffield Wednesday on Sunday.

Mackay, in his second season in charge at the Bluebirds, replaced Jones in June 2011.

"There will obviously be fond memories and I would hope people would take that into account and give Dave a warm welcome on Sunday," said Mackay.

Jones had six years at the Bluebirds and led them to the FA Cup final in 2008, losing 1-0 to Portsmouth, and a Championship play-off final in 2010, losing 3-2 to Blackpool.

He is credited with turning Cardiff City from a mid-table Championship side to genuine Premiership promotion contenders.

Jones, who led his new club Sheffield Wednesday from League One to the Championship last summer, will return to Cardiff for the first time since he was sacked in May 2011.

But Mackay's Cardiff are top of the Championship while Jones's recently promoted Sheffield Wednesday languish one off the bottom of the table, with the pressure mounting on the manager.

Mackay paid tribute to the man he succeeded and his achievements with the club in the Welsh capital.

"To be at a football club for six years is a long time now," said Mackay.

"You had the changeover from Ninian Park to the new stadium and he got the club to the play-offs, a play-off final and an FA Cup final and that is a good achievement for a manager to have at a football club.

"When a manager leaves, they are invariably sacked and at the point people want change.

"I hope with time most people would look at the period of time somebody was at a football club as a whole and assess things.

"There will obviously be fond memories and I would hope people would take that into account and give Dave a warm welcome on Sunday."

For his part Dave Jones says he is not concerned by the reception he receives at the Cardiff City Stadium.

"Whether I go back and I get a good clap or whatever, do you know what? I'm not really bothered because I'm focussed on one thing.

"I'm employed by this football club and it doesn't matter whether I spent 20 year there.

"I don't look for their results or whatever, because my time is done, and I did quite well.

"If you look at where they were and what they've got now, I was part of that.

"Their new manager now has taken it on and he'll want to take it on to the next level, and after him so-on and so-on. That's the job that we're in."

Cardiff City have four players back in contention to face Wednesday, with defenders Andrew Taylor, Ben Turner, Kevin McNaughton and midfielder Don Cowie all expected to be fit again and available for selection.